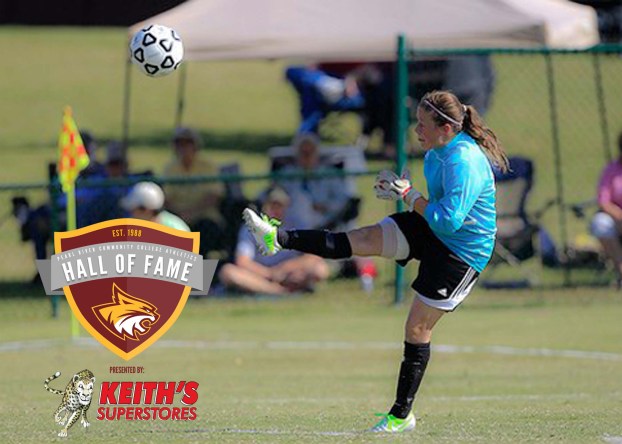 POPLARVILLE, Miss. — When Hannah McCarty is near Exit 29 on I-59, she can’t help but make a detour to Pearl River’s campus. The Tupelo native likes to make the loop around campus to see the changes and reminisce about her memories as part of the Pearl River women’s soccer team. The Wildcats could always rely on her between the posts during the 2011 and ‘12 seasons.

McCarty will be recognized on July 30 as part of the Pearl River Community CollegeAthletics Hall of Fame presented by Keith’s Superstores. She joins a Class of 2021 that includes baseball’s Jake Smith, men’s basketball’s Darral Willis Jr. and football’s Randy Boyette.

“It’s one of the greatest honors that I’ve ever had, getting to experience this,” McCarty said. “I was so excited when I got the phone call the other day. I can’t even say how much it means to me. It’s great to be able to come back and reminisce on all the good memories and the state championship.”

Tickets for the banquet and golf teams can still be secured by visiting PRCCAthletics.com/HOF or by calling Traci Spence at (601) 403-1193.

Mother nature played a role in McCarty ending up at The River. Against the odds, a snowstorm hit in Tupelo the day she was set to sign with rival Jones College. When former Wildcat coach Jack Byrd heard about the delay, he quickly gave McCarty a call.

“It’s a funny story,” McCarty said. “I was supposed to go to Jones, but a snowstorm happened, which doesn’t happen very often in Tupelo. It delayed my signing day. Coach Byrd had heard about me and called me the next day, and at the end of the day, I decided to come to Pearl River.”

The decision worked out for the goalkeeper as she quickly began stamping her name into the Pearl River record books and claiming accolades. McCarty accumulated 36 wins as the goalkeeper, which is the most in Pearl River’s history. She followed up her phenomenal career by earning All-State and All-Region 23 selections after the 2012 season.

McCarty credited her coaching staff for her success.

“I had two of the best coaches,” McCarty said. “Coach Byrd as our head coach and coach Gordon (Waters) as my goalie coach. They pushed me every single practice and every single day to be the best goalkeeper I could be. Even though the practices were very hard, it all really paid off in the end.

“It was an amazing feeling. Every win that we had was amazing. Standing back there in goal experiencing it with the team was great.”

Byrd highlighted competitiveness as a reason for McCarty’s success

“Hannah is the ultimate competitor and she worked very hard at her goalkeeping craft every single day and is so deserving of this Hall of Fame induction,” Byrd said. “She was such a humble player who preferred not to be in the spotlight she so often deserved.

“Hannah is the ultimate team player, and I was blessed to have coached her for two seasons.”

“The 2011 team was a great team, and we had a great season. We practiced and played hard. At the end of the year, we lost by one goal in the championship. That was devastating, but I feel like it made us an even better team the next season. We kind of carried that loss on our backs as we went through the preseason into the following year.

McCarty remembers feeling more motivated than ever going into her sophomore campaign. The motivation and hard work paid off as the Wildcats claimed both the State and Region 23 championships during her sophomore season.

“During my sophomore year, we had the opportunity to bring ourselves back from the year before when we lost,” McCarty said. “When the freshmen came in that year, we reiterated what had happened to us the year before so that we could push them to be the best that they could be. The hard work really paid off and it was the most memorable thing for me at Pearl River, coming back to redeem ourselves after losing the state championship the year before.”

McCarty went on to play one season at Division II Montevallo before returning to Pearl River to be a volunteer coach.

“Hannah volunteered as our goalkeeper’s coach for the 2015 season,” Byrd said. “Of course, we won another State and Region 23 championship that season. Winning seems to follow Hannah wherever she goes, and I can’t wait to see what the future holds.”

McCarty obtained a bachelor’s degree in kinesiology from The University of Southern Mississippi. She now attends the physician’s assistant program at The University of Tennessee Health Science Center and is in her last year of the program.

The golf tournament is a four-person scramble format and will be at 10 a.m. July 30. Each team is $600. The fee includes green fees, golf cart rental, food, beverages and a gift bag courtesy of BankPlus.

Anyone who wishes to participate is encouraged to register quickly as the number of teams is limited at The Bridges. To register to play, or to become a sponsor, visit PRCCAthletics.com/HOF.

Families can purchase individual dinner tickets for only $100. Sponsorship packages are also available for the banquet, beginning at $2,500. More information on sponsorship opportunities is available at PRCCAthletics.com/HOF.

ABOUT THE HALL OF FAME

The Pearl River Athletics Hall of Fame currently houses 134 of the greatest student athletes and coaches to represent The River. The Hall of Fame was established in 1988 with an eight-person class and has been an annual staple at PRCC with the exception of 2020; the ceremony was canceled due to the COVID-19 pandemic.

For a full list of PRCC Hall of Famers, visit PRCCAthletics.com/HOF/roster.

Know someone who’s deserving of being enshrined? You can visit PRCCAthletics.com/HOF/Hall_of_Fame_nomination_form to fill out the nomination form.