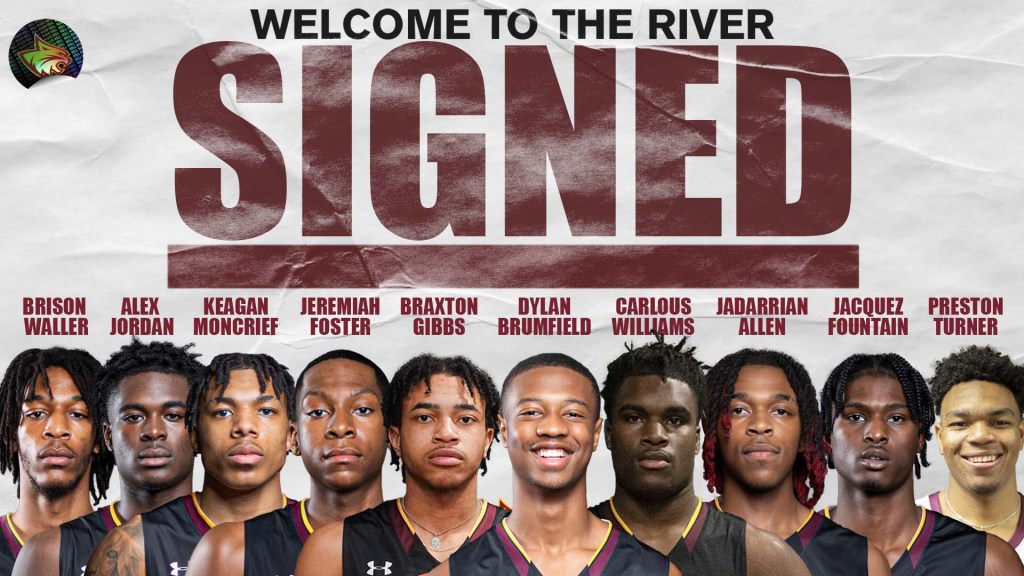 The 6-foot-2 Jordan was a valuable member of the HHS Tigers over the last two seasons. As a junior, he averaged 6.2 points per game, 2.6 assists per game and 1.8 rebounds per game. Jordan took it up a notch as a senior, averaging 15.1 points and 2.6 rebounds and helping his team reach the MHSAA 5A Final Four.

“Alex is a very hard-nosed player that competes extremely hard,” Oney said. “He’s coming out of a Hattiesburg High program that is always a good place to recruit at because of the success and how well-coached they are.”

As a senior, Jordan earned First-Team All-Area by Pinebelt Sports as well as a Capital Sports All-State Honorable Mention selection.

The 6-foot-3 Brumfield was a three-year starter for an Oak Grove team that won 67 games during that span. The guard averaged 6.2 ppg, 2.8 rpg and 1.7 apg as a sophomore in 2018-2019. In his junior year, he doubled his production, averaging 12.8 points, 2.3 apg, 3.9 rpg and 1.3 steals per game. In his final season, Brumfield was instrumental in helping the Warriors reach the MHSAA 6A Final Four, averaging a double-double with 15 ppg and 10 rpg. He also averaged six assists.

“He’s the son of a coach and you can tell when you watch him that he has been around basketball all of his life,” Oney said. “He’s the kind of player that we can play at the point and the wing. He’s so heady as a player that he can function position-less. He can get out there on the floor with the other guys and figure it out. We’re looking for big things out of him”

Brumfield claimed a number of accolades during his prep career, earning three All-Region 5-6A selections, a Capital Sports All-State Honorable Mention selection as well as 2021 First-Team All-Area and 2020 Second-Team All-Area selections by PineBelt Sports. He played in the North/South All-Star game after his junior season.

“Braxton has somewhat been an unknown,” Oney said. “I think people are going to quickly find out that they missed the boat on him. He’s extremely quick and can score in bunches. I look for him to come in and help us out a lot right away, especially on the offensive end.”

Turner is the prototypical big-bodied post player that the Wildcats have been lacking. As a senior, the 6-foot-8 Turner averaged a double-double with 14 ppg and 10 rpg. He also chipped in two assists and one steal per game.

“We haven’t had this type of kid in the last couple of years,” Oney said. “He’s a big-body post that can bruise on the inside. He plays good interior defense and he’s a lot better scorer than I anticipated coming in. I think that he will compete for a lot of minutes, and he’ll make us better as a team with the way that he approaches practice.”

“Jeremiah is probably the hardest playing kid that I’ve ever coached,” Oney said. “He doesn’t have a downshift at all. He’s 1,000 miles per hour each second that he’s on the court. As a coach, you love that. I think he’s going to help us out a lot this year.”

He was a Capital Sports All-State Honorable Mention selection and was given Clinton’s impact player award.

Moncrief will be a versatile player for Pearl River and can easily switch between playing on the outside and the inside. The 6-foot-4 forward averaged 13 points, two assists and six rebounds before missing time with an injury.

“Keagan is a very athletic and versatile player,” Oney said. “He can play outside and also go in and play with the big guys. I think he can become our best defender. Those kinds of guys are always valuable when you’re trying to win a championship.”

During the 2021 season, Allen was the leading scorer for the Copiah-Lincoln Wolves. The 6-foot-2 guard averaged 10.5 points, 4.9 rebounds and 1.8 assists. He was lethal from beyond the arc, shooting 40.5 percent. Allen’s best game came against ECCC when the guard lit up the Warriors for a career-high 30 points with seven rebounds and three steals.

“It’ll be good for us not to have to scout against JD this year,” Oney said. “He can really, really shoot it. Shooting was something that we targeted with this year’s class. I think JD fits the bill. He will benefit a lot from playing with Jarron and Earl. He’ll have the opportunity to get a lot of open looks that I think he’ll knock down for us.”

Waller transferred to Pearl River from Northwest Florida State College. The forward averaged 7.1 points, 2.8 rebounds and 0.4 assists for the Raiders as a redshirt freshman last season.

“I think that when Wildcat fans watch Brison play, the first person who will come to mind is Isaih Moore,” he said. “He’s a long 6-8 kid and is an extremely good athlete who can jump out of the gym. He has a good touch. He can face up and shoot and he can also drive to the goal. We did a good job convincing him to come here.

Fountain played the last two seasons for Albany Tech. The 6-foot-5 guard led the Titans in scoring last season, averaging 17.6 points. He also averaged 1.3 assists, 6.4 rebounds, 1.4 steals and one block. As a freshman, he scored 18.7 ppg and brought in 6 rpg.

“Jacquez is a scorer that can shoot it well,” Oney said. “When he gets the ball, he has one mindset and that is to go score. I thought that we needed that with this team. It’s always good to have guys who are geared to score because they are never scared of the big moment. Every moment to them is the same.

“I think Jacquez is going to be a fine addition to the team that we’ve put together this far.”

The Wildcats recently announced the signing of Harrison Central forward Carlous Williams. The 6-foot-6 forward was previously committed to South Carolina and was ranked the No. 2 player in Mississippi by 247 sports.

He was selected as a Clarion-Ledger dandy dozen member as a junior and a senior.

Due to the NJCAA granting an additional year of eligibility, the Wildcats receive a boost in the form of returning sophomores Earl Smith (Jackson; Lanier), Jaronn Wilkens (Biloxi) and Jariyon Wilkens (Biloxi).

Smith did not leave the court often, playing 32.4 minutes per game. He averaged 11 points, 4.2 rebounds and four assists.

Jaronn Wilkens was the leading scorer for the Wildcats averaging 15.8 points. He also grabbed 6.4 rebounds and 1.4 assists.

Jariyon Wilkens did it all for Pearl River scoring 13.1 ppg and bringing in 6.1 rpg.

Oney was excited to have their leadership returning to his team.

“This is a once in a lifetime chance at this level to coach these guys for three years,” he said. “Coming into this year, they’ve only lost two games in the Wildcat uniform. Hopefully, by the end of this year I’ll be able to say the same thing.

“Their leadership will be invaluable. I think the newcomers are going to look up to them and I think that those guys are ready to embrace that role.”

Gross was a threat from the three-point line for the Wildcats, making 41.2 percent of his shots. He averaged 7.2 points, 3.8 rebounds and 1.1 assists.

Jake Smith was heart and soul of Pearl River’s…