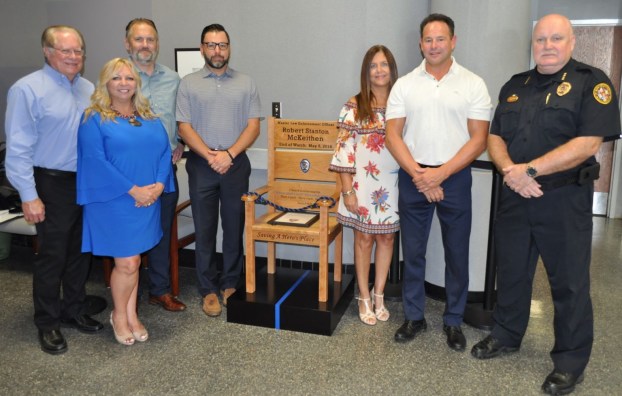 The honor chair was provided by Saving A Hero’s Place, a non-profit organization dedicated to providing a memorial to police departments who have suffered through the line of duty loss of a fellow officer. The Beau Rivage casino learned of the organization and reached out to Saving A Hero’s Place Executive Director, Tommy Capell, on behalf of the men and women of the Biloxi Police Department, to coordinate having the memorial constructed.

On the website for Saving A Hero’s Place, Tommy Capell explained how the organization came into being – “Saving A Hero’s Place, Inc. was formed through tragedy.  In 2013, I was contacted by another Police Officer to build a chair similar to several chairs that were placed at another sub-station years back.  This chair would be in honor of a San Antonio Police Officer who died in the performance of his duty.  The chair was built March 2013 and placed at the sub-station where the officer worked.  The following month, on April 18, 2013, MIT Police Officer Sean Collier was killed in the line of duty by the Boston bombers.  Officer Sean Collier was sitting in his patrol vehicle serving his community.  Unable to sleep for weeks, I knew something needed to be done for this officer.  I immediately got with my wife Robbie Capell and two fellow officers.  I advised them that I wanted to build an Honor Chair for Officer Collier.  The MIT Police Department was contacted and welcomed the idea of an Honor Chair.  After quickly raising money from the community, friends, and family, the four of us traveled by vehicle over 2,000 miles to deliver the honor chair.  Officer Sean Colliers honor chair was presented on May 28, 2013.  The emotions that came with this honor chair, and seeing what the chair meant to the MIT Police department, made us all realize we were not done.

Biloxi Police Chief John Miller said “The Biloxi Police Department wishes to thank all the members of the community we so proudly serve, who were involved in making this thoughtful memorial a lasting part of the Lopez-Quave Public Safety Center.”

Two representatives of state agencies spoke to the Pearl River County Board of Supervisors to update them on the services... read more