Gulf tides different than on most coasts 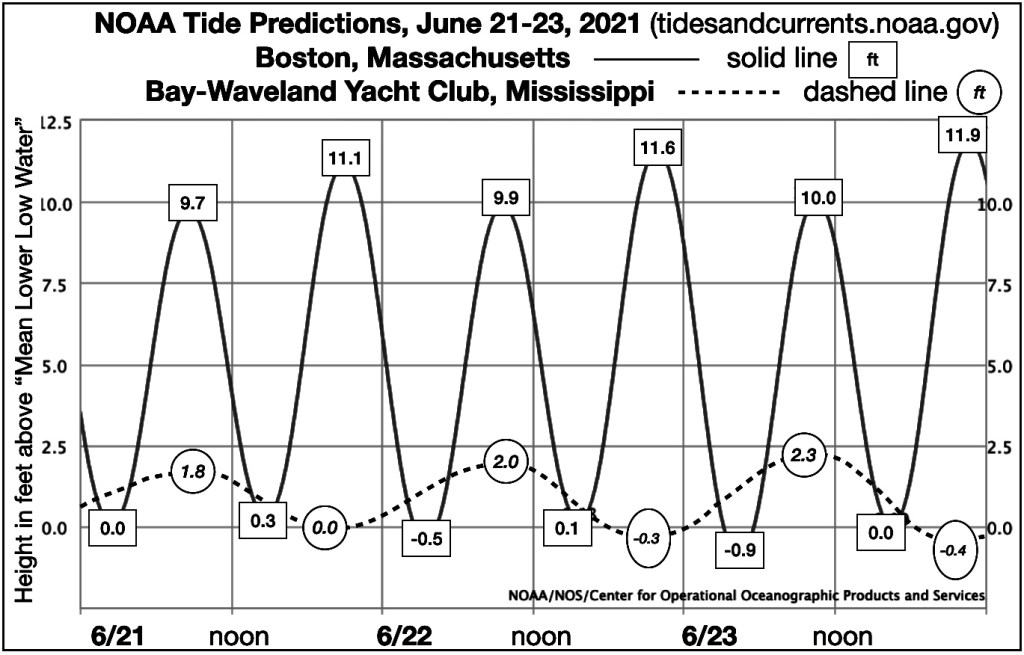 When people first started living and working on the coasts of oceans, they must have quickly noticed two things. One was that the water level rose and receded every day. Second, the time of high and low water always came a little later than the day before.

As people began to explore new coastlines, they learned that tidal cycles are not the same everywhere. Two common differences can be seen by comparing tide predictions this week at nearby Bay St. Louis with those for Boston, Massachusetts.

The most noticeable difference is the range of water height between high and low tide. The range at Bay St. Louis is about two feet, while at Boston the range is from nine to almost twelve feet.

These particular days exhibit some of the larger ranges experienced this month at both locations. That’s because this month’s full moon occurs on June 24th. The tides on dates near the full moon and new moon are known as “spring tides” and have the largest tidal ranges of the month.

The second difference between the two locations is more subtle than the range, but is just as important. Boston, like most coastal locations, experiences two high tides and two low tides each day, while at Bay St. Louis there is usually only one high and one low tide each day.

One daily high and low tide is common across the northern Gulf from Louisiana to the Florida Panhandle, but two daily tide cycles are more common elsewhere in the Gulf and around the world. Tidal height ranges around the semi-enclosed Gulf are generally small compared to other coastlines.

The differences in the number and size of tides at different coastal locations is because the continents, complex coastlines, and variations in water depths disrupt the tidal wave as it moves around the Earth. The result is a complex pattern of tides within each ocean basin and along each coastline.

Nowhere are local effects more pronounced than in the Bay of Fundy on Canada’s east coast.

The length of the bay is such that the time it takes the tidal wave to travel from the mouth to the far end of the bay and back almost exactly matches the time between high and low tide. This resonance results in the Bay of Fundy’s water levels rising and falling 30 to 50 feet every six hours.

At least when you go to the beach in Mississippi, you don’t have to worry about getting caught too far offshore as the tide comes in.