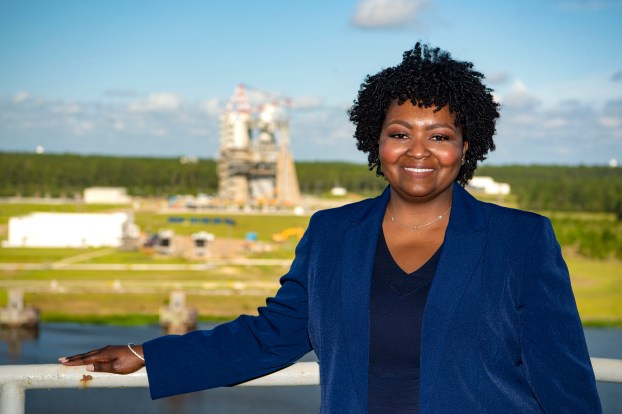 Born and raised in Hollandale, Mississippi, Veronica Causey has made her childhood dreams, once considered unimaginable, possible at Stennis Space Center. As a senior resource analyst in the Stennis Office of the Chief Financial Officer, she played a major role in the recent completion of Green Run testing of the core stage for NASA’s Space Launch System rocket on the B-2 Test Stand. Submitted photo

Given the chance, Veronica Causey has definite words of wisdom she would offer to her 13-year-old self and others like her. “It truly does not matter where you come from or how little you have growing up; what matters is your belief, perseverance, and willingness to walk through the doors [of opportunity] before you,” she would tell the girl who grew up working in Mississippi cotton fields. “Also, if you happen to be the first, do not be afraid to create a door.”

They are words Causey, a resource analyst at Stennis Space Center responsible for annual budget formulation and execution for several critical test projects at the rocket propulsion test site, clearly has put to practice in her own life. At 13 years old, however, the path that led to her Stennis career seemed unlikely.

Born and raised in Hollandale, Mississippi, one of the richest cotton-growing areas in the nation before the American Civil War, Causey learned the value of hard work and dedication from a young age. “I grew up in an area that I never knew was classified as “poverty-stricken” until the age of internet and Google,” she said.

Her parents, Alice and Jimmy Causey, made sure to instill what they viewed as, necessary values into their young children – to be godly and respectful to all, to obtain an education, and to work hard in whichever career path they chose. During the summers before she would return to Simmons High School, Causey spent hours a day working in various cotton fields, the only type of job that was available for children her age.

It was during these earlier years that Causey had her first experience with space through a television program titled Lost in Space. The show followed a space colony family struggling to survive when an accidental stowaway throws its ship off course. While the show originally aired before her time, Causey was able to watch reruns as a child. “I can recall the Robinson family being stuck on this planet with a robot and having to overcome many challenges and fight space creatures,” she said.

It was not until 2010 that Causey would find herself surrounded by space again. After relocating to Picayune, Mississippi, following Hurricane Katrina, a large Category 5 Atlantic hurricane, Causey was offered an opportunity to work as a financial technician with the Naval Oceanographic Office at Stennis in 2006. By the end of 2010, she began her journey with NASA at the NASA Shared Services Center. After returning from a holiday break in 2016, Causey transferred to the Stennis Office of the Chief Financial Officer (OCFO) Financial Management Division.

Like most career paths, the job did not come without its own set of challenges, and Causey had to face a big one – test activities. From ordering propellants to renting tents for test viewing events, funding plays a major role in the day-to-day life at the center. This was particularly true during Green Run activities to test the SLS core stage on the B-2 Test Stand.

Causey had a strict budget to stick to for the project. However, the testing schedule was constantly affected by factors outside of NASA’s control, including a worldwide pandemic and several tropical storms. As a result, Causey was tasked with not only extensions but also requesting more funding for the project. She considers seeing the successful final hot fire test of the SLS core stage Green Run series in March as one of her proudest moments supporting NASA. In her eyes, it was proof that years of planning is the key to success, and anything can truly be accomplished when working as a team.

“Being a part of an historical event that will impact the world and mankind, is simply an honor,” Causey said. “I am deeply grateful to play a role in such a significant part of America’s history.”

Causey considers the people she works with the best part of her job at Stennis and has built “unbreakable” friendships with those around her. She and her team members have received three Group Achievement awards (2017, 2019, 2020) in recognition of their outstanding support and contributions to several activities, including the solar eclipse event, the Apollo 50th anniversary, and A-1 Test Stand refurbishment project in support of the Artemis program.

“Stennis Space Center is a workplace that values the collaboration of individuals with diverse backgrounds, skills, cultures, and ideas no matter the race, gender, religion, sexual orientation, etc.,” Causey said. “I am proud to say that I am a member of the Stennis workforce.”

When facing her future at Stennis, Causey is excited for what is to come, and she hopes to witness Artemis II, the first crewed flight test of the SLS rocket, in person. “Here at Stennis, we test the future and the future is Artemis.”

Konya Miller, Poplarville School District’s superintendent who will be retiring at the end of this month, was recognized by the... read more