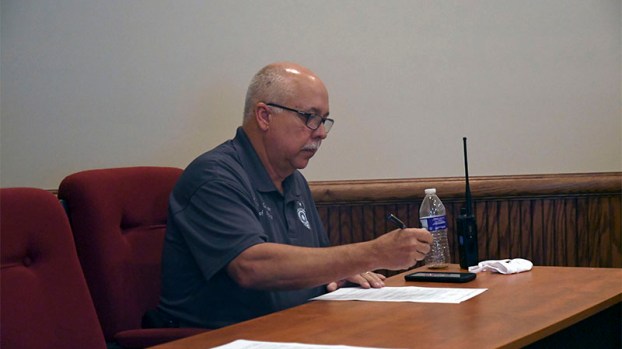 No Issues: Poplarville Police Chief Daniel Collier marks through an item on the agenda after giving his report to the Board of Aldermen. Photo by Jonathan Mitchell.

The Poplarville Board of Aldermen issued several payments for work done on the City Square Park during Tuesday’s meeting.

The Board approved a motion to pay $31,970 to MitchCo Construction, Inc. for work performed on the City Square Park – Phase III Project.

There was also a payment approved to Landry, Lewis & Germany, PA for $383 for work on the same project.

After approving the necessary payments, the Board approved a six-day contractual extension of time for MitchCo Construction, Inc.

Mayor Rossie Creel said the company asked for the extension because there were several punch list items that needed to be completed and that recent severe weather hampered the completion of those final tasks.

The need for renovations and repair of the Poplar Springs Lake pier had been discussed in previous Board meetings, and the decision was made Tuesday night to apply for a grant to help facilitate the necessary repairs of the pier.

After discussion, the Board approved a resolution authorizing an application for the 2021 Land and Water Conservation Fund Grant.

According to previous coverage, the grant will be a 50-50 split between the city of Poplarville and the Mississippi Department of Wildlife, Fisheries and Parks. Of the city’s portion of funds, 25 percent can be matched with in kind services, while 25 percent of the funds must be in cash.

Following the approval of the resolution, Poplarville Police Chief Daniel Collier notified the Board that the department submitted its monthly NIBRS Reports without any issues.

The Board also dealt with an account adjustment request.

An account adjustment request from Ms. Patricia Fairley was seeking a reduction of $145 that would’ve resulted in an adjusted credit balance of $145.

The Board took the item under advisement because there wasn’t any paperwork submitted with the request to verify the need for the adjustment.

The Board also dealt with two items pertaining to the reappointment of two members of the Poplarville Public Library Advisory Board.

Mr. Walter Lowe’s and Mr. Stanley Knoll’s six-year terms expired on November 19, 2020 and both volunteered to maintain their position on the Board.

The Board approved both reappointments.

The board went into closed session to discus Poplarville Police Department personnel matters and pending litigation.