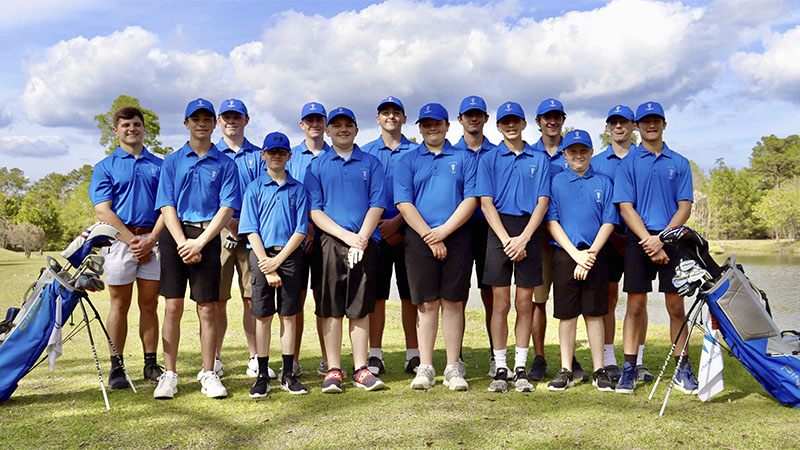 Coming Back: The PRC golf team will only be losing five athletes to graduation, so a lot of experience will be back on the course for the Blue Devils next season. Submitted Photo.

Stormy conditions meant the golfers had to play 27 holes the first day of the tournament, which isn’t what the golfers are used to.

“They played in rain and very, very wet conditions. For them to have never played 27 holes back to back like that, I think they did pretty good, but I feel like our boys are stronger golfers than it showed,” Coach Shelly Dill said.

Of the six athletes who competed, five were seniors, so Dill took an experienced group to Elm Lake Golf Course in Columbus, Mississippi.

“Just because they were seniors, that’s not the reason they got to go. It was all done off of scores and how they played throughout the year. On the practice round they were really talking it up and doing really well, and then I do think some nerves got to them,” Dill said.

Miley was the only golfer who won’t be graduating this year, and having a taste of state level competition has inspired the youngster to pursue the sport more seriously.

“I definitely have seen a drive in Cort. He’s now turned it on and showed he wants it, and he’s talked about getting more lessons. I see him turning it on more and I hope he’s also going to lead the rest of our boys on the team and push them, too,” Dill said.

With so many athletes leaving after this season due to graduation, Dill is making sure the rest of her golfers stay active during the offseason.

She can’t be with them in organized practices, but will provide other options for golfers seeking to keep their technique sharp heading into next season.

“I’m trying to get them involved in summer tournaments and trying to keep them motivated. Hopefully they will stay practicing. It’s not like I can just follow them through the summer, which makes it really tough. I have to trust they’re actually going out there, working and trying,” Dill said.