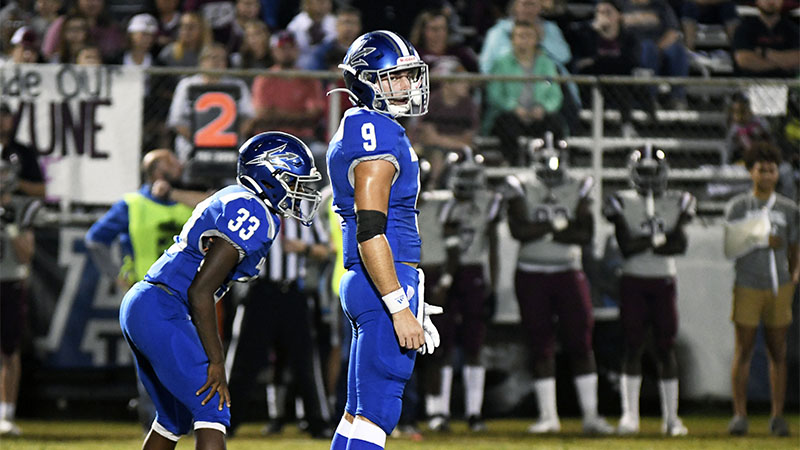 Leader: Cam Brunson looks to the sideline for a play call during a PRC game last season. File photo by Jonathan Mitchell.

Pearl River Central’s football team took on the Forest Hill Patriots last Friday in a spring jamboree game as a culmination of all the work the team had done over the spring months.

Last year’s squad didn’t get the opportunity to compete in a spring game because of COVID-19, so getting back in a competitive setting this year felt strange.

“It kind of felt like the first spring training I’d ever done in my life, going a year without it and then doing it again and planning it. It’s about learning about your team and seeing what you have going into next year,” Head Coach Jacob Owen said.

The jamboree isn’t about winning or losing, but instead provides an opportunity to evaluate what areas need to be worked on.

Coaches can call specific plays, try new formations and place athletes in unfamiliar spots without worrying about the final score.

Owen used the game as a test for his players and they passed with flying colors.

“It was very encouraging to see everything we focused on since December show up on Friday. We focused on being more disciplined this offseason because I thought we had too many penalties last year. We focused on being tougher this offseason, focused on becoming more of a team and eliminate selfishness, and I thought all of those things showed in our game Friday. We don’t have very many kids out there right now, but we have players who are brothers and that’s more important than anything. That’s what I’d say I’m most proud of,” Owen said.

Because of the short prep time and nature of the game, Owen wanted his players to make the most of the opportunity to play.

“You want to focus on yourself and your team, and get them better each and every day. It was good to play a game, but when the season starts our record and Forest Hill’s will be the same no matter what, 0-0. I just wanted them to go out, have fun, play physical and play fast,” Owen said.

The game took place at the University of Southern Mississippi’s football stadium, and the loosening COVID-19 restrictions played an important role in allowing the players to have a more or less normal experience.

“It’s great because at Southern Miss they required temperature checks and masks to enter, but there were no restrictions as far as crowd size. It was nice to get back to a sense of normalcy. Any time you can watch kids go and compete, which hadn’t been the focus because you were having to worry about all of these other things, but the focus should always be on the kids going out there to have an opportunity to compete and have fun,” Owen said.

Now the Blue Devils will head into the summer with their eyes set on the start of the season.