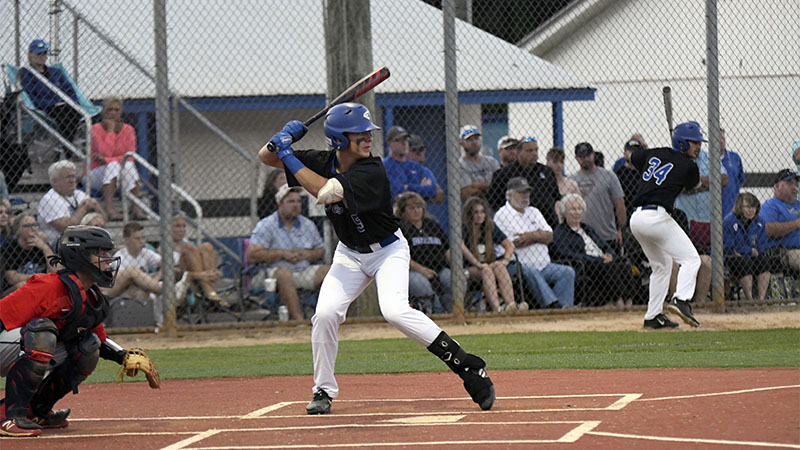 Double Digits: PRC's offense showed up in a big way against Brookhaven in game two of the three game series. Photo by Jonathan Mitchell.

After a tight 7-6 win the night before, Pearl River Central’s baseball team defeated the Brookhaven Panthers 12-1 last Friday to win the best of three series.

Landon Droddy and Jacob Johnson combined for seven strikeouts over six innings while only allowing one earned run.

Jacob Stockstill went 1-3 with three RBIs in a game that saw the Blue Devils take care of business to advance to the next round of the playoffs.

“It was absolutely the answer we needed. We didn’t have to hit a whole lot because they were walking and hitting us, but we were patient, let the game come to us and established command early. Especially after we had not our best performance in game one, we answered back as we needed to,” Walther said.

The postseason mantra of survive and advance applied as PRC did what was necessary to get the dominant win in six innings.

The Blue Devils were aggressive on the base paths and stole nine bases during the contest, which was partially due to a change in mindset.

“We waited for the opportunity to present itself to go ahead and do that. We had said we were going to be a lot more aggressive that game, so we just applied some pressure and it was working so we stuck with it,” Walther said.

Johnson coming in and getting two innings of work was another positive that came out of game two.

The freshman has featured for the Blue Devils over a dozen times this season, and getting some quality reps in a playoff game doesn’t hurt the young pitcher’s development moving forward.

“I think it gives him a lot of confidence if we need him later on, which we might. He’s throwing the ball extremely well. Regardless of being a freshman, that stuff doesn’t matter so much because he has earned any time he got,” Walther said.

The 2-0 series win over Brookhaven means the Blue Devils will now face the Pascagoula Panthers in the third round of the playoffs, which is set to take place May 13.

Pascagoula defeated South Jones in a three game series before sweeping Natchez in the second round to establish the matchup with PRC.

Walther said his team will have to work to stymie the Panthers’ offense in order to pull out a victory.

“The challenge is offensively they’re very, very good. We’re going to have to make them earn everything they get. It’s as simple as that. I felt like against Brookhaven we didn’t do that. We walked some and hit some (batters), which is uncharacteristic of us this year to do that. It was kind of an eye opener so hopefully it focuses them,” Walther said.