PRC baseball knocked out of playoffs 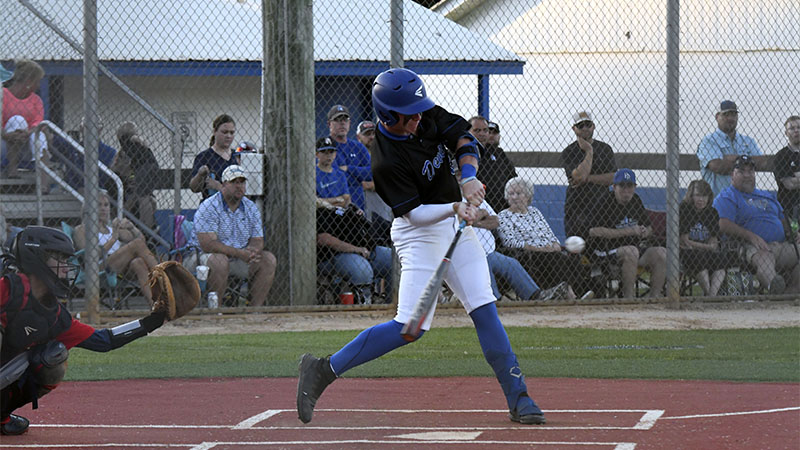 At The Plate: Ethan Songy makes contact with a pitch during a plate appearance in PRC's playoff series against Brookhaven. Photo by Jonathan Mitchell.

Pearl River Central dropped game one against Pascagoula last Thursday 5-2 then lost game two 2-0 in a highly contested affair that resulted in the Blue Devils getting knocked out of the playoffs.

Landen Droddy saw the majority of the action in game two, going 4 1/3 innings, striking out one and allowing two earned runs.

The three players will be returning for the 2022 season, but PRC is losing several seniors in key spots throughout the lineup.

Head Coach Neil Walther said their contributions on and off the field left an impression on some of the team’s youngsters.

The team then had exit interviews Monday afternoon as Walther and his staff had one on one conversations with returning athletes.

Areas to improve, roles within the program and possible position changes were all discussed before the athletes head into the summer so they know where they stand in the program.

This process is an important part of getting the remaining athletes in the right mindset to take over for the departing seniors.

“People graduate guys every year, so the team chemistry changes and roles change. It’s a sign of a good program when you lose people to graduation, but you don’t miss a beat going (forward). A lot of that is due to the seniors who were there to teach people the PRC way,” Walther said.

All of the Blue Devils’ pitchers will be returning next year, along with five of the starting nine players in the lineup.

There will be a significant amount of experience to draw from, while the high number of returnees means there will be plenty of competition from up and coming athletes looking for a starting spot heading into next season.

“What is good for us is that you have kind of an open competition there. I’m excited because there may be a guy that started this year that won’t next year. Right now it looks like there are five guys who will be pretty tough to knock out of their spot, but there are eight or nine guys battling to get one of the other spots. It’s going to bring out the best out of them,” Walther said.