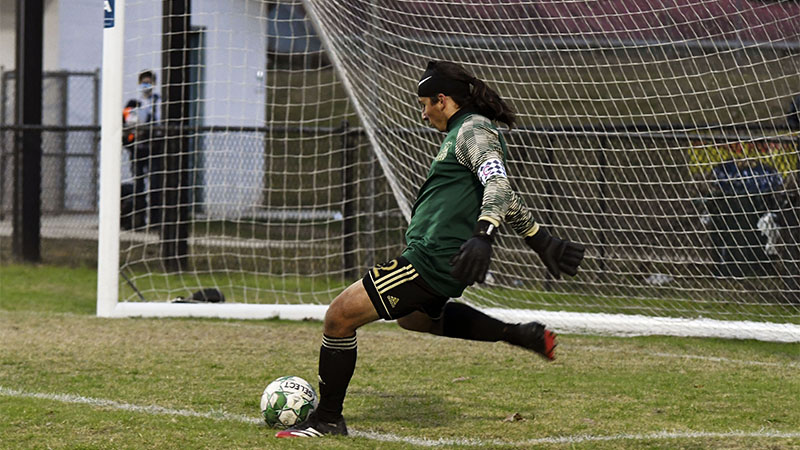 Captain: Donovan Minor takes a goal kick during a game this past season. Minor was named a team captain this spring. File photo by Jonathan Mitchell

Poplarville’s boys soccer team is taking advantage of the 2021 offseason after the 2020 iteration was shut down due to the pandemic.

COVID-19 put the Hornets’ soccer team behind schedule last year, but now Head Coach Luke Gipson and his athletes are able to use the upcoming months to develop the team’s young athletes.

Weight room workouts, training sessions and the naming of two of the team’s captains have been the high points of a busy spring as the team prepares for the summer.

Senior Donovan Minor and junior Lane Ladner have been given the captain’s armband and will help keep the team’s focus and intensity at the right level during the offseason.

“Both guys are here every single day, work hard every single day and are well respected, well liked. We couldn’t have picked better captains. You give them the captain band to give them a voice that’s a step above, so when they speak the team will need to listen,” Gipson said.

Poplarville is losing 10 players to graduation, so the spring and summer will serve the key role of getting the team’s new starters adjusted to their positions and teammates, while also allowing the squad to be better prepared for the start of next season.

The incoming freshman class is a big one, and while it’s full of talent, those skills will need to be honed and perfected over the coming months.

“As far as development before district it’ll be huge. We had a lot of ties early (this past season) and had to sacrifice offensive strategy to play defense and rely on our strengths while figuring out what we were doing offensively. That took the first 10 games of the season and that’s what we usually get in the summer,” Gipson said.

The Hornets will participate in several friendly matches over the summer to get the athletes back on the pitch in a competitive environment.

Along with the games, Poplarville plans to attend Pearl River Community College’s soccer camp from June 21-24.

The combination of the matches and the camp will not only allow players to get competitive minutes, but will also enable the team to fine tune specific strategies and lineups.

“Both will be huge because we have a large upcoming freshman class that will assume some pretty big roles. We’re young again and it’s important getting in that competitive mindset and (for the freshmen) to get them playing time,” Gipson said.