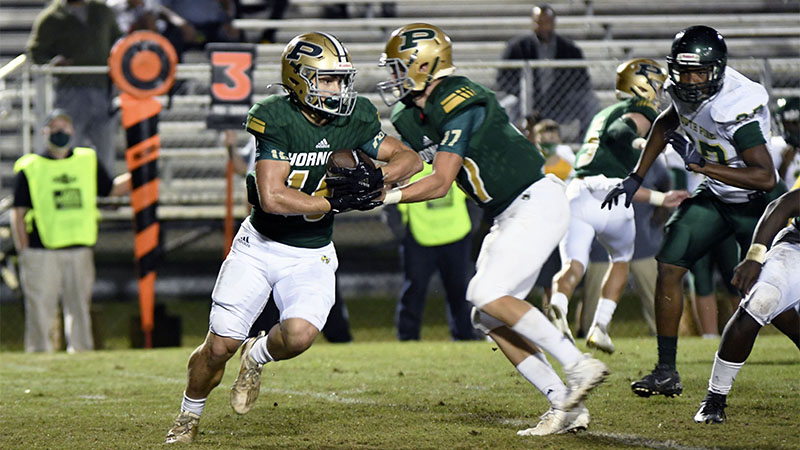 Multiple Carries: Running back Greg Swann takes a handoff during a Poplarville game last season. Swann was one of the team's seniors that'll have to be replaced heading into next season. File photo by Jonathan Mitchell.

The Poplarville Hornets football team had its spring game last Friday against Wayne County to end a busy couple of weeks.

There are several holes to fill on both sides of the ball for the Hornets, so the spring workouts and game served as an opportunity for Head Coach Jay Beech and his staff to determine each player’s best fit.

“This spring was a good chance to find those guys who will replace those seniors that graduated. We didn’t have this time last year, so we’re ahead of the game as far as where we were last year. We had to find out a lot about our team, some good and some bad. Now we know what kids we can count on and now we can go through the summer and try to become a better football team from what we learned in the spring,” Beech said.

The spring game gave some younger athletes a chance to step into starting roles, while also showing which players held on to the lessons learned during spring practices.

Considering the plethora of open spots, Beech was hoping the matchup with Wayne County would provide some answers.

“We have a handful of positions where we don’t know who will fit in that spot and take over as a starter. We spent a lot of time with our ones, twos and threes, had a good competition and now I think we’re closer to knowing who will fill those spots next year,” Beech said.

The Hornets will now move into the summer period, which will be still be important, but won’t have the same frantic pace as last year’s when the team was trying to make up for all of the lost time after being shut down due to the COVID-19 pandemic.

Beech and his staff will be looking for the players to make the most of the summer workouts, while also developing some leadership skills to replace the outgoing athletes.

“I told the kids we’re only as good as our senior class. If we have a good senior class as far as being committed and showing up, we’ll have a good football team and everybody else will fall in line. Last year’s senior class was outstanding, one of the best as far as commitment and dedication, and I think this year’s class will do the same thing,” Beech said.