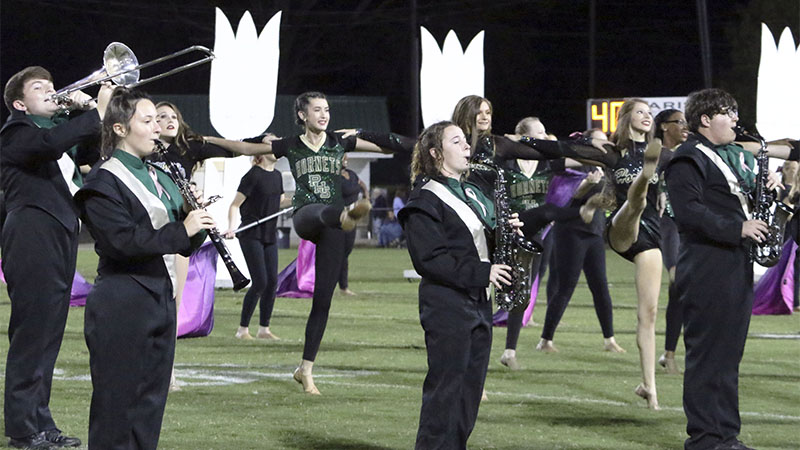 Back Outside: The Poplarville band will now begin preparing for marching season following the spring concert. File photo by Jonathan Mitchell.

The concert served as the last time musicians played the music they’d spent months perfecting and Band Director Ken White said the show was a success.

“In early March we got our state evaluation and earned superior ratings, then we started reading more literature and had a great spring concert. It was fantastic,” White said.

There are several key differences between an indoor show and a marching performance.

However, the main deviation with an indoor performance is that the musicians are in a controlled environment, meaning the quality of the music must be at an exemplary level.

“The one thing that is majorly different is that the music has to be better prepared or almost perfect. You don’t have those outside factors like wind or the temperature. You’re inside, comfortable in a chair and air conditioned, so everything has to be more precise with the music aspect,” White said.

Now the cycle repeats itself, as the spring season ends so does preparation for marching season.

The band will use the upcoming months to not only work on music, but perfect the drill aspect as well.

Marching performances require the inclusion of intricate movement patterns the band members must perform while still playing their respective instruments at a high level.

“I start off with the music first because everything is based on it. Our tempos, our speed and our phrasing is based on the music. For the next month we’ll work on nothing but music. We might go outside and work on fundamentals sometimes, but it’ll be mostly music based,” White said.

Last year COVID-19 made rehearsing difficult as the band was under stringent restrictions when it came to student numbers and environments the musicians could practice in.

Now that some of those restrictions are loosening, or gone entirely, the band will be able to practice more as a group.

“As far as things that’ll be slightly different, we’ll probably have a few more inside rehearsals because last year a lot of the music rehearsals had to be spread out all over campus. This year they’ll be in more ensemble rehearsals instead of just individual or sectional,” White said.

The band’s preparation, and ability to do so without limitations, will also be beneficial in bringing new musicians up to speed.

White said having the spring and summer to educate the younger members will help make band camp less overwhelming.

“We want to establish a standard and try to do a lot of stuff this time of year with fundamentals because it’s hard when it’s 100 degrees outside and blazing. The more we can cover during this cooler weather makes it a lot easier and our tempo faster. We’re actually going to have a couple extra rehearsals over the summer so if students need extra help they can come in and we can help so that band camp isn’t just information overload,” White said.