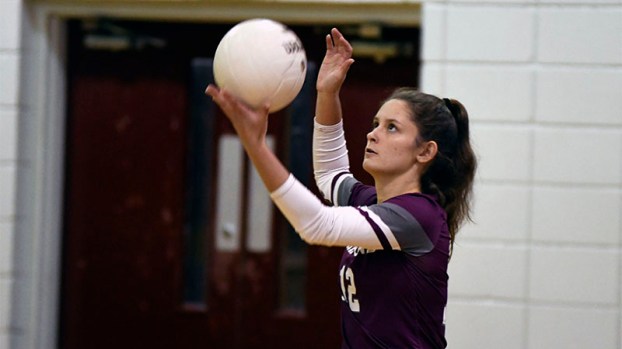 New Squad: Sarah Stockstill goes to serve during a Lady Maroon Tide game last season. Stockstill was one of the team's seniors, so the tryouts helped serve the purpose of possibly finding the libero's replacement. File photo by Jonathan Mitchell.

Picayune made its inaugural appearance in the playoffs last year after just three seasons and is now working to put together a squad to improve upon last year’s success.

Head Coach Courtney Dickens had the athletes run through a plethora of passing, serving, serve receive and defensive drills.

Those who stood out either had solid fundamentals, or were willing to put in the extra effort Dickens was looking for.

“The first year we had volleyball nobody knew how to play, so (building a squad) was very difficult. I was just picking athletes and people who looked athletic. Now this is going to be year four so it’s easier to pick a team. If I think the fundamentals look good I can keep those kids, develop them and make them better,” Dickens said.

Last summer was difficult for the team because of all the COVID-19 restrictions in place.

Numbers were limited and some workouts just weren’t feasible due to the guidelines.

Many of the restrictions have now been relaxed, which means this summer the athletes will not only get to spend more time in the weight room, but Dickens won’t have to drastically alter practices to follow certain guidelines.

“I think it’ll help tremendously and last year if somebody had even cold symptoms they had to stay away for a couple days. Now we’re at the point we can start enforcing being at practice more and we’ll be able to get in the weight room. I’ll get to spend a lot more time with them,” Dickens said.

The summer will be a busy one for the Lady Maroon Tide.

The possibility of having scrimmages exists thanks to the looser restrictions, which means the team may get to have some competitive matches over the summer.

The work done over the offseason will greatly influence how Picayune starts the 2021 season, so Dickens is planning on getting as much time in on the court as possible.

“We’ll be practicing in June three days a week and then the third week of July we’ll start practicing every single day. We’ll maybe try to find a couple scrimmage games and we’re definitely going to camps. The kids learn a lot from camps so I’m excited to do that,” Dickens said.