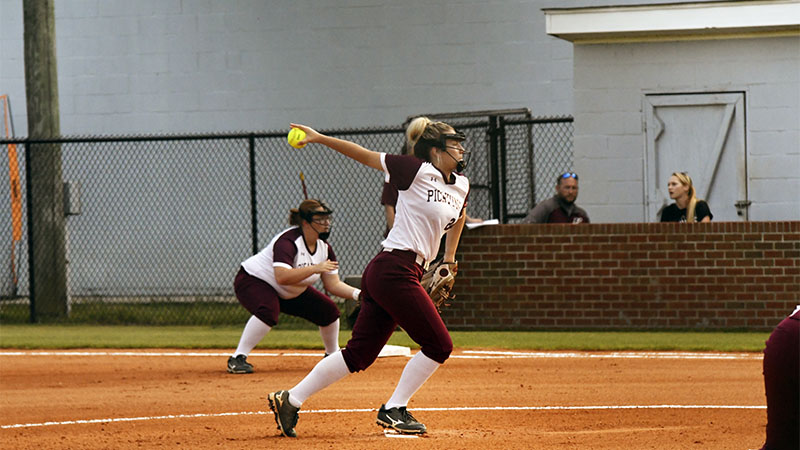 Coming back: Kylie Burnette throws a pitch during a Lady Maroon Tide game this past season. Burnette will be one of the team’s starters that will be returning next season.

The Picayune softball team hosted nearly 60 athletes last Thursday as the program had its tryouts for incoming players.

Position was also an important factor because Dickens knows who she has coming back from this year’s squad, so certain athletes might get moved around if they’re better suited for another spot on the field.

However, if there are multiple athletes fighting for the same role, that’s not a bad thing in Dickens’ mind.

“They may come in and tell me they play infield and not look good, but then in the outfield look really good. Once I keep those kids I still will let them compete for whatever spot they’re wanting because competition is a wonderful thing to me. I see kids work a lot harder when they have some competition,” Dickens said.

Another aspect of the tryouts, and offseason workouts in general, is identifying and developing new leaders within the squad.

The Lady Maroon Tide is losing several key players who embraced those leadership roles, so Dickens will be on the lookout to see who steps up to fill those voids.

“The good thing is I do have a good talented group of 8th graders coming up, 12 to 14 of them, and I do think those kids are going to step in and learn how to lead. I think this group has the potential as freshmen to lead by example and lead by their actions because they do play hard,” Dickens said.

The tryouts were the first step in kicking off a busy offseason for Picayune.

Players won’t have too much time off before practices start up again, and Dickens has also set up numerous summer games to take place in the month of June.

The contests will not only serve as a way to get the athletes in a competitive mindset during the offseason, but will also allow Dickens to test her new players and see where everyone fits in the lineup.

“I think that’s going to be good for us to see live pitching. Each time we play in those games they’ll be doubleheaders, two five-inning games. I like that because it gives us an opportunity to move kids around, or for those players that didn’t get varsity playing time (last season), to put them in and see what they can do,” Dickens said.