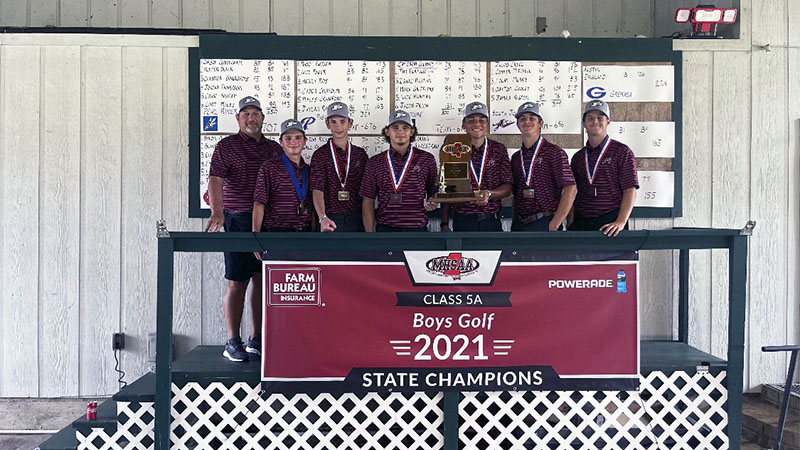 Number One: Picayune’s golf team poses with its state championship trophy after dominating the competition at the state tournament this past week. Submitted photo.

The Picayune Maroon Tide golf team took home the 5A boys state championship this past week at the state tournament.

The team shot a 618 overall and was led once again by Cam Guidry who shot a 143 and was named the individual medalist.

Picayune got off to a hot start on the first day and didn’t look back en route to claiming the championship.

“After the first round we had a 37 shot lead. We had such a big lead I don’t think I slept that night because I was thinking, ‘If something happens and we blow this lead I won’t be able to come back to Picayune.’ We won by 57 or 58. That’s unheard of. The other teams had some good golfers, some strong number ones and number twos, but they weren’t four golfers strong like us,” Head Coach Mark Summers said.

The Maroon Tide squad was an experienced one with four seniors, and the athletes kept their composure on the big stage.

The team participated in five majors this year, winning three and coming in second in the other two competitions, so the golfers were ready to claim another victory against the best teams in Mississippi.

“I guess you could say my seniors, they’re seasoned veterans. They have played in a lot of tournaments and have really done well over the last three years. We probably could’ve had a shot at state last year had COVID not come, but it did. You can’t really shake them. They know what they have to do,” Summers said.

The Maroon Tide had identical competitive records in previous years, but COVID-19 took away the chance to compete at state.

“This same group did the same thing two years ago. We’ve been a strong golf team for the last three years. Last year, had we played, we had a good shot to win state, but at least we got the opportunity to play state this year,” Summers said.