Picayune football to have spring jamboree 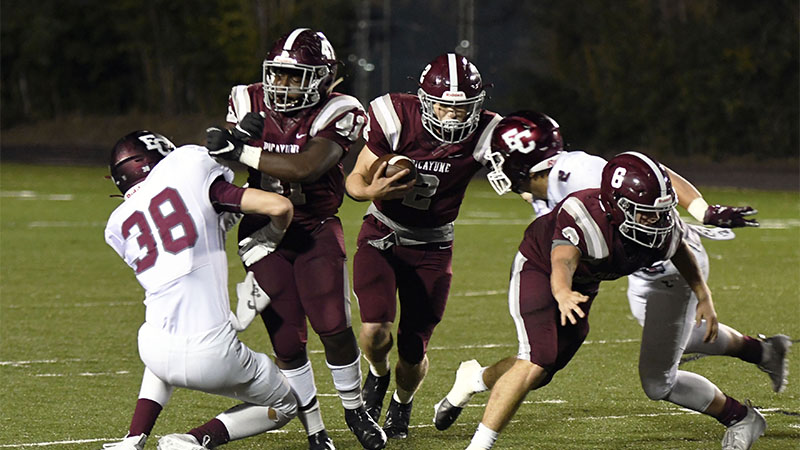 New Faces: Running back Austin Samples carries the ball during a game last season. Samples was a senior, so the Maroon Tide will have find new talent to take that position, along with several other starting roles on offense and defense. File photo by Jonathan Mitchell.

The Picayune Maroon Tide football team will be hosting a spring jamboree at Lee-Triplett Stadium May 14 that’ll get the players back in a competitive environment for the first time since the season ended.

Admission will be $5, and there will be concessions and merchandise available for purchase.

The spring has seen the Maroon Tide get incoming players acclimated to the complexity and intensity of varsity level football, and the athletes will be put to the test during the jamboree.

“We have a whole new set of guys that have to learn what to do. We’ve got incoming ninth graders and incoming tenth graders so we’re trying to establish a little bit of toughness, but also perfecting what we’re doing and why we’re doing it,” Head Coach Cody Stogner said.

The jamboree will double as a fundraiser for the Maroon Tide as the football team looks to make the most of lighter COVID-19 restrictions.

Picayune had to deal with reduced attendance at games in 2020 due to pandemic guidelines, along with the added expense of doing the necessary things to protect players and staff from COVID-19.

While getting in a competitive environment in the spring is great for the athletes, the added bonus of raising funds makes the jamboree a win-win situation for the Maroon Tide program.

“It’s a good thing to play against somebody else and that’s the main thing from the football aspect, but from a program aspect it’s good to have because football costs money. We want to be first class and in order to be first class we have to raise funds, and the booster club does a great job of that. Every little thing goes a long way,” Stogner said.

On the field, the Maroon Tide will be taking on some tough competition.

The scrimmages will allow coaches to evaluate specific positions, while also allowing new and returning starters to mesh in a competitive environment.

“It’s really to see who can block and who can tackle. If you can’t do either one of those things you can’t play. That’s the most important thing and a good way to do it is to go up against somebody else. We’re playing two good teams, so it’ll be a good measuring stick. With returning guys, they’re a year older so we’ll get to see how much tougher they’ve become and if they’ve gotten better or not,” Stogner said.

Following the jamboree the Maroon Tide will head into a summer offseason that will play an integral role in developing talent.

Athletes will go through a series of workouts while becoming accustomed to the nuances of the offensive and defensive systems.

For Stogner, the summer represents an important period of time that’ll have a direct impact on the team’s 2021 season.

“Summer is going to be huge for us. We have to get bigger, stronger and faster. That’s what we’re going to use the summer for and fine tune everything we’ve been doing during the spring. Summer is the key to how good our football team can be,” Stogner said.