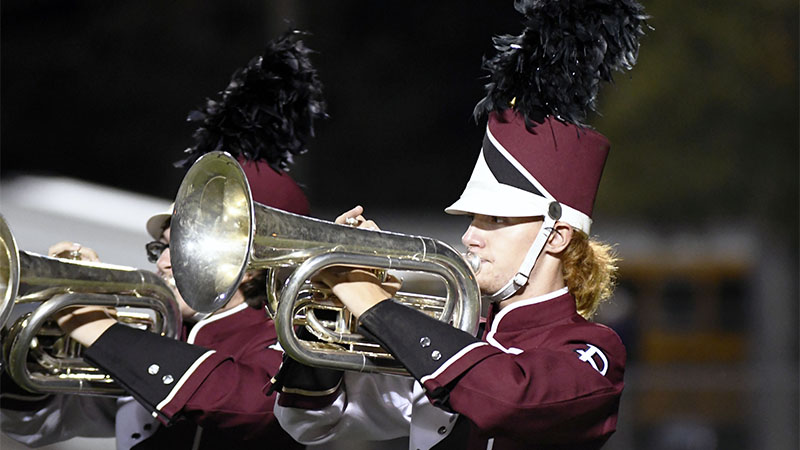 Basics: The Maroon Tide band is moving into marching season, which means soon the musicians will participate in band camp to learn marching fundamentals and new music. File photo by Jonathan Mitchell.

The Picayune Maroon Tide band is shifting gears following the performance of its spring concert and is now turning its attention to the summer months. The band will transition from concert season to marching season, which carries over some similarities, but mainly a host of differences.

Musicians will not only be required to play complex pieces of music, but will have to march in formation while doing so. In preparation, the band is building props for the upcoming show, preparing for drumline auditions that’ll come at the end of May, repairing broken instruments and conducting interviews for captains.

While the past year has been a weird one for the band as the organization dealt with the difficulties of putting on performances during a pandemic, the hard work paid off.

Musicians were able to participate in numerous shows across varied locations this past year even with COVID-19, and those experiences will help the band when it goes to perform on Friday nights in front of a raucous stadium.

May and June will be more about preparation than anything else as the band prepares for a hectic July.

Band camp will take place in July this year as a sense of normalcy starts to return for the staff and musicians following last year’s unusual summer schedule.

The first couple days of camp will be for new musicians and incoming freshmen, anyone who hasn’t marched with the program before.

Cockrell and his staff will go over marching basics with the musicians and cover all the necessary bases before the rest of the ensemble assembles later in the week.

Then it’ll be all about getting the steps and formations right before mixing in some music.

“At the beginning of the week we focus on marching fundamentals and getting everybody to look the same. After lunch, when it’s super hot outside, we come inside and we start music rehearsal. We don’t put music to feet until the second week of band camp. We’ll be dabbling in each category, but the categories don’t come together until we’ve reached a certain point in each category,” Cockrell said.