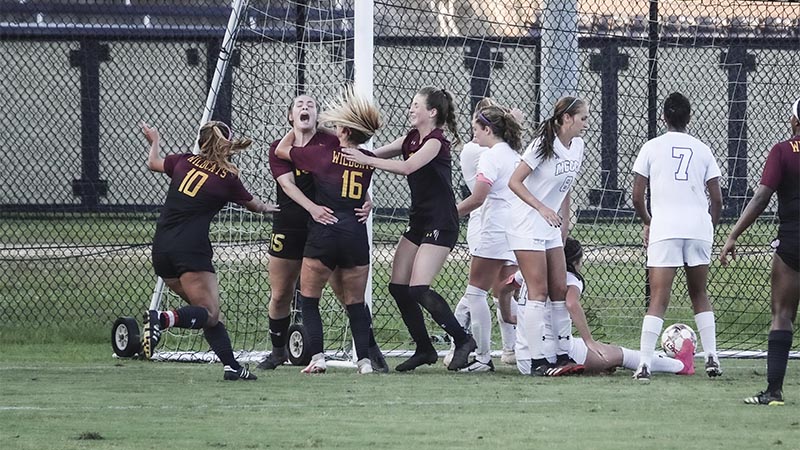 PERKINSTON, Miss. — Friday night’s regular season finale at rival Mississippi Gulf Coast lived up to the billing. With playoff positioning on the line, neither team was willing to give up much. Thanks to a late goal in the final minutes of regulation, the Wildcats and Bulldogs ultimately tied 1-1 at Bary Thrash Field.

“It’s always going to be a good game and a close game,” Pearl River coach Henrik Madsen said. “They’re very well organized. I thought our girls did a good job of moving the ball and trying to break them down. We created the chances we needed to, we just didn’t put them away.”

With the tie, Pearl River (6-3-4 overall, 5-2-3 MACCC South) slips to third in the MACCC South Division and will travel to East Central to open the playoffs on Tuesday. Kickoff in Decatur is set for 6 p.m.

“We knew whoever we ended up facing we were going to have to handle our business,” Madsen said. “We know it’s going to be a good game.”

SECOND HALF
The intensity from the first half carried over to the second 45. After being awarded a yellow card minutes before the Bulldogs (7-4-2, 6-2-2) broke the scoreless tie in the 57th minute with a shot from beyond the corner of the box.

Down but not out the Wildcats ramped up the pressure. Sydney Spataro (Long Beach) was denied inside the box in the 65th minute. Six minutes later Erin Clifford (Ocean Springs) redirected a shot just in front of the goal but the MGCCC keeper kept the nimble touch out.

Both Aubrie Edwards (Biloxi) and Azaria Breaux (Gulfport) were denied in the 77th and 83rd minute as the Wildcats hunted for the equalizer.

Pearl River finally broke through in the 88th minute. After earning a corner kick in the waning minutes of the match, Spataro whipped the ensuing kick over the keeper and toward the far end of the goal. Lily Lentz (Gilbert, Ariz.; Dr. Camille Casteel) crashed the back post and headed the ball past a slew of MGCCC defenders, sending her teammates in to jubilation.

“Finally someone on a good corner wanted to head the ball,” Madsen said. “We had a couple others that went straight across so it was good to see her really want it.”

FIRST HALF
The first half was pretty even for most of the first 30 before the Wildcats dialed up the pressure in the final 15 minutes.

PRCC earned its first shot of the match in the 32nd minute when the ball popped out to Katie Havard (Lucedale; George County) just outside the box. MGCCC’s keeper saved the midfielder’s shot from distance, earning PRCC a corner kick. The ensuing kick led to a point-blank opportunity by Briana Carr (Laurel; West Jones) but the Bulldog keeper turned away the chance.

MGCCC’s best chance came in the final two minutes of the half when the Bulldogs earned an indirect kick near the box. PRCC’s wall reacted perfectly, clearing the ball out for a Bulldog corner and the Wildcats played out the rest of the half to a 0-0 draw.