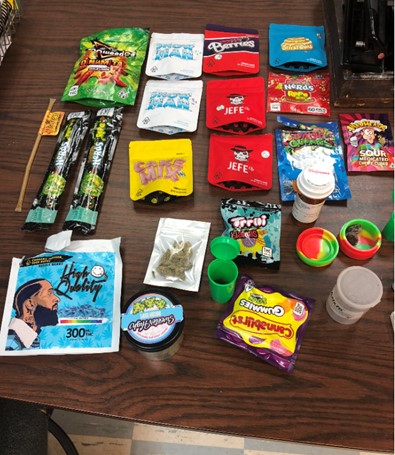 JACKSON, MS – Multiple arrests have been made following a community enhancement operation

On May 6, 2021, approximately sixty law enforcement officers with the Mississippi Bureau of Narcotics,

As a result of this operation, nine individuals were arrested on felony charges, including narcotics and

firearms violations, and seventeen individuals were arrested or cited for misdemeanor violations. Agents

methamphetamine, 100 grams of marijuana, and two handguns. An additional 35 citations were issued by

local agencies for violations such as no insurance or suspended driver’s license.

This operation resulted in the following felony arrests:

 Eugena Dapremonti was charged with Trafficking of Schedule I – THC Infused Products, Failure to

Yield to Blue Lights, and No Driver’s License.

and Promethazine with Codeine while in Possession of a Firearm.

while in Possession of a Firearm.

Intent to Distribute, Possession of Marijuana, and Violation of Probation.

 Christopher Shane Odom was charged with Possession of a Controlled Substance –

Methamphetamine and Marijuana and an outstanding Arrest Warrant for Failure to Appear.

 Brandon Chace Emery was charged with Possession of a Controlled Substance.

 William Stockstill was charged with Violation of Probation.