No. 11 Pearl River stumbles at No. 7 Gulf Coast 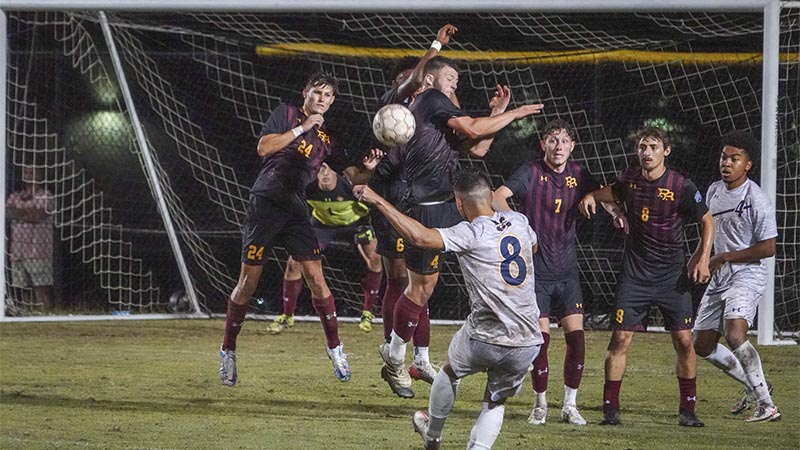 In The Wall: No. 11 Pearl River defender Jamie Chamberlain jumps up to block a free kick during Friday’s rivalry game at No. 7 Gulf Coast. The Wildcats lost 2-1 in Perkinston, Miss. (PRCC ATHLETICS.)

PERKINSTON, Miss. — Two different 60-second runs Friday night decided South Division. No. 11 Pearl River scored one minute into the rivalry match at No. 7 Gulf Coast, but the hosts netted two goals within a minute at the end of the game top the Wildcats and claim the MACCC South Division title.

“The game just went back and forth and the last five minutes they won the game,” Pearl River coach Drew Gallant said. “We were dying and they were still playing the game like they weren’t even tired.”

With the loss, the Wildcats slide to third in the South and will visit Itawamba to open the MACCC playoffs on Tuesday. Kickoff in Fulton is set for 3 p.m.

In their first meeting of the year, Pearl River (10-3 overall, 7-3 MACCC South Division) was unable to solve the Gulf Coast defense, falling by way of shutout. The Wildcats didn’t waste any time getting on the scoreboard Friday. Less than a minute into the match Ryley Smith (Manchester, England; Castlebrook) broke through the middle of the Bulldog defense and laid off a ball to his right for Andre Nicholson (Kingston, Jamaica; Clarendon College). The Jamaican took the pass and blasted a shot into the top right corner.

“What a way to start off a game,” Gallant said. “We scored in the first couple of minutes and then we were trying to hang on for 88 minutes.

“That was a goal off of a counter with a great assist from Ryley.”

In the 65th minute the Wildcats strung together another wild sequence. Miguel Hernandez (Gulfport) drove around the right side of the Gulf Coast defense and looped a ball across the goal. Dustin Cuevas (Kiln; Hancock) crashed the back door but his shot bounced and hit the cross bar, possibly with the help of MGCCC’s keeper.

Pearl River almost suffered a catastrophic blunder in the 68th minute. Playing around the back line, the Wildcats swung a pass to keeper John Bowman (Bay St. Louis; Bay). The sophomore’s first touch was too strong and he coughed the ball up to a pressing Bulldog. After initially slipping, Bowman recovered at the edge of the box to snatch the ball from the charging forward before he could make a decisive play.

With the Bulldogs applying pressure looking for an equalizer in the 84th minute Bowman made perhaps his most remarkable save of the evening. A deflected ball fell to a MGCCC forward’s feet. The attacker caught the ball with his back to goal, spun and fired a rising shot that Bowman parried away.

Things went sideways on the Wildcats moments later as the Bulldogs netted two goals in a matter of minutes to leap past Pearl River.

“The game went back and forth non-stop,” Gallant said. “Their keeper had a bunch more saves again tonight — and so did John.”