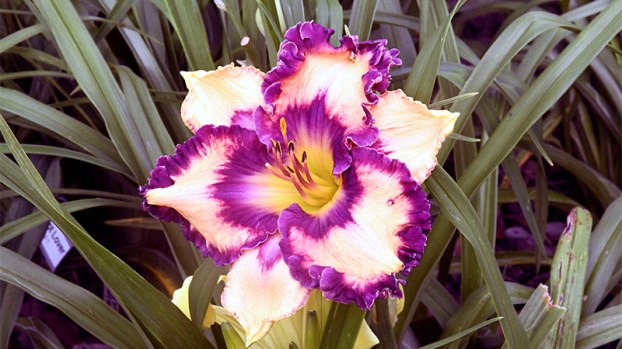 Unique: One of several daylily variations were on display at Cline's garden last week. Photo by Jonathan Mitchell. 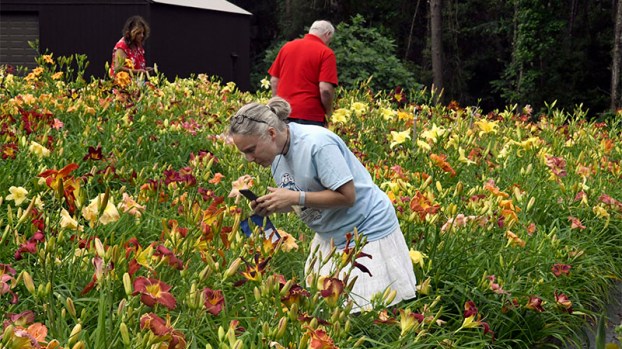 New Flowers: A visitor examines on of Cline's daylilies during Friday's visit. Photo by Jonathan Mitchell.

Kay Cline started growing daylilies 25 years ago and last Friday got the chance to show off her beautiful landscape to a national audience.

Every year the American Daylily Society has a national convention that draws hundreds of enthusiasts to take tours of local gardens and admire the flora.

This year, the convention took place in Mississippi meaning approximately 270 people from the convention visited Cline’s beautiful daylily garden to see her two and a half decades of work.

A big part of Cline’s journey has been the hybridization of her flowers.

Hybridization is when two different flowers are cross-pollinated, allowing for the creation of an entirely new and unique flower.

Cline said she has over a dozen registered varieties at this point.

“I was particularly interested in daylilies and that you could cross them, name them after friends and stuff like that. I then found a daylily society and joined that. I joined and found a lot of really nice people with a ton of interest,” Cline said.

The constant cross-pollination has left the garden dotted with daylilies of varying size, shape and color.

Visitors as part of the convention last Friday were able to take in the scenery in all its glory, a rare opportunity that Cline definitely appreciated.

“This was a once in a lifetime thing for me. I wanted them to see my flowers that I had hybridized. It was nice for everybody to enjoy and to see how we grow flowers in the south,” Cline said.

Being recognized for her work is one thing, but Cline didn’t start gardening for the enjoyment of others.

It was a culture she grew up in, accepted and decided to invest in over 20 years ago.

It’s in her blood, and the rewards go far beyond facilitating the creation of new flowers.

“I’ve always enjoyed gardening. My family liked to garden so I grew up with gardeners and I’ve always enjoyed exercise, and getting outside, this is a lot more fun than getting on a treadmill. It’s a little more rewarding than getting on the treadmill. It’s great exercise and it’s a great social hobby for staying connected with people. Plus, being outdoors is calming,” Cline said.

Being recognized by a national audience is another source of inspiration for Cline to continue her work.

The future may just see a few more Cline creations being spread throughout the United States.

“I plan to register some more daylilies and I hope they get grown and distributed to a lot of different places, something good enough to be enjoyed by a lot of people,” Cline said.