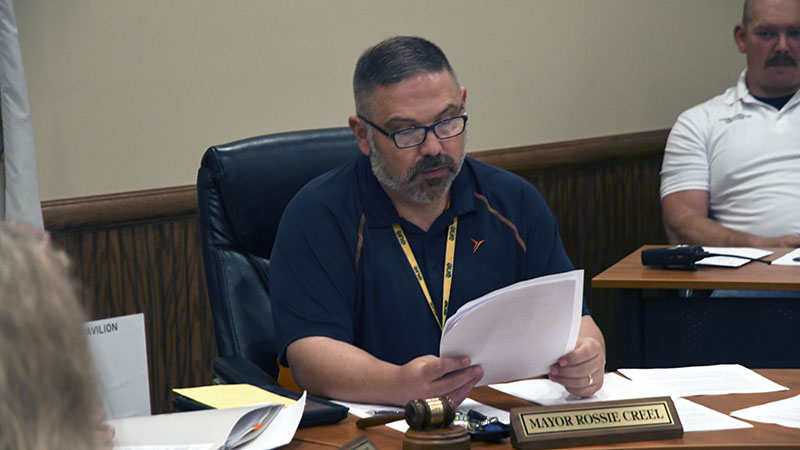 Mayor Rossie Creel reads an ordinance concerning the use of golf carts on city streets with a low speed limit. Photo by Jonathan Mitchell

The Poplarville Board of Aldermen held its regularly scheduled meeting Tuesday evening where its members heard an update on options for the repair of the Poplar Springs Lake pier.

Following the approval of last meeting’s minutes and the claims docket for the amount of $105,048.75, the Board discussed renovation of the Poplar Springs Lake pier.

Renovations are needed due to its age and damage caused previously by termites.

The Board decided to move forward with the Land & Water Conservation Fund Grant to help fund renovations.

The grant will be a 50-50 split between the city of Poplarville and the Mississippi Department of Wildlife, Fisheries and Parks.

Of the city’s portion of funds, 25 percent can be matched with in kind services, while 25 percent of the funds must be in cash.

After discussing and approving moving forward with the grant application, the Board discussed the city’s golf cart ordinance.

The ordinance was made available to the public for input and changes following the Board’s last meeting.

The Board then approved the purchase of a new Kawasaki – EFI Scag Tigercat II 52-inch riding mower for the price of $8,404.

The public works department needed the new mower because the current mower’s engine died after nine years of use.

After discussion regarding the purchase and whether there was money for the purchase, the board approved a motion to buy the mower.

It would’ve cost more than $2,200 to put a new engine in the old mower and purchase other parts, so the Board felt it was best to purchase a new mower.

Fire Chief Jason Bannister then talked with the Board about purchasing two new sets of turnout gear.

A motion to make the purchase was approved and then the Board approved the lower quote for the purchase of various hoses and nozzles for the fire department at the cost of $3,954.