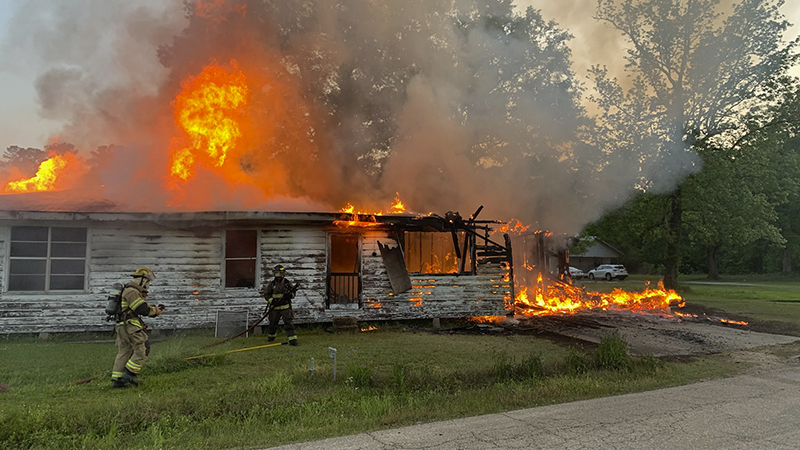 One of the structure fires occurred at 117 Joe Fleming at 6 a.m., said Pearl River County Fire Marshall Jonathan Head. The other was at the end of Lisa Lane at approximately 1 p.m.

The cause of both fires is still under investigation. Both structures are a total loss. No one was living in either house.

When asked if he suspects the two fires are related, Head said that determination hasn’t been made yet and both fires are still under investigation.

“The Nicholson Fire Department made a very fast response, along with the Picayune Fire Department. They brought the fires under control pretty quickly,” said Head.

Scott Downes, the owner of the home on Joe Fleming and member of the Nicholson Volunteer Fire Department, suspects the fire was intentionally set. While he has cameras on his property which adjoins the property where the fire occurred, the only images the camera caught were of the house going up in flames.

He said the home has sat empty since the death of his father. Since then, Downes and his siblings inherited the property. Now, he said, the home will be demolished once an investigation into the cause of the blaze has been closed. Downes said a lot of great memories have been lost due to the fire.

Sunday’s fires are just part of a seemingly ongoing spate of fires at homes that are either empty or abandoned.

Just over three weeks ago, another abandoned structure in Nicholson burned down; it was an abandoned residential structure at 58 Emmett Meitzler Road. That home is in close proximity to the two structures that burned Sunday. Head said the cause of that fire is still under investigation.

A Facebook post from the Nicholson Volunteer Fire Department said the department was dispatched to the Emmett Meitzler Road fire at approximately 4:30 a.m. on March 19. According to the post, the fire was completely out by 6 a.m., but the department received five more calls throughout the day at the same location and units found the residence burning again in different locations.

“Any information in reference to the person responsible for setting these fires can be reported to the Pearl River County Sheriffs Department,” the post states.

There was another abandoned structure fire in Nicholson on January 5, a mobile home on Pat Davis Road, confirmed Head. That fire is also under investigation, although it appears to be unrelated to the other structure fires as it is on the other side of Nicholson, he said. The other three fires are just related in terms of proximity to each other, said Head.

“It’s unusual for any abandoned structure to catch fire, especially whenever there’s several within a short time period,” said Head.

“There’s no statute of limitation on arson, so until I can find evidence that proves otherwise, it’s still an active investigation,” he said.