PRCSD recognizes parents of the year 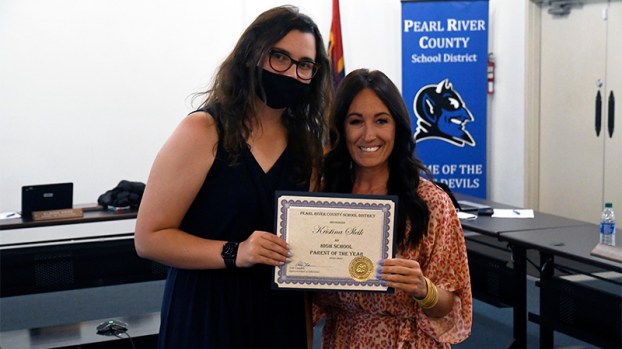 Supportive: Kristina Sleik received the award of high school parent of the year at Thursday’s school board meeting due to her caring nature and problem solving skills. Photo by Jonathan Mitchell 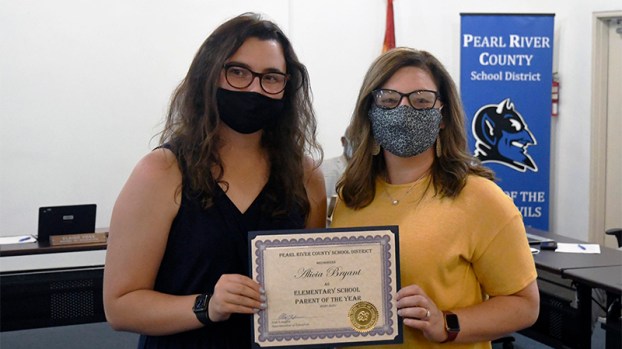 All In: Alicia Bryant, PRCSD’s elementary parent of the year, poses with student body representative Sophia Albasini after receiving her award. Photo by Jonathan Mitchell. 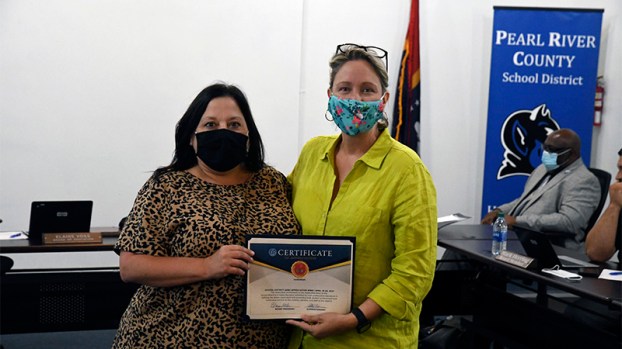 Keeping The Course: Administrative Assistant Sherri Quarterman was recognized for all the work she does for the district Thursday evening. Photo by Jonathan Mitchell. 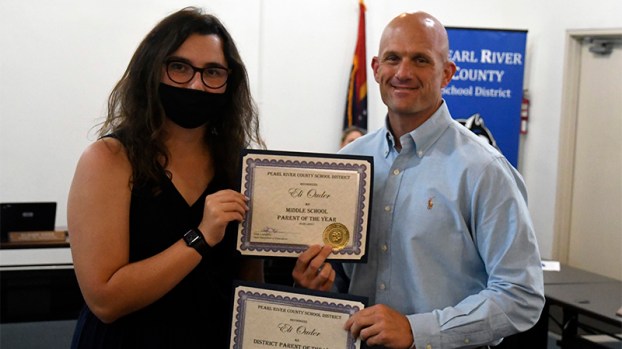 Setting An Example: Eli Ouder was named the middle school and district wide parent of the year thanks to the role model he serves as for the district’s middle school students. Photo by Jonathan Mitchell.

Members of the Pearl River Central Board of Trustees met Thursday evening for their regularly scheduled meeting to recognize the district’s Parents of the Year and resolve the usual aspects of district business.

One of the first orders of business for the Board was hearing the district’s annual financial audit report from Joel Cunningham of Cunningham CPAs.

Cunningham said the district didn’t have any irregularities, and that the decisions they’re making are sound and backed by solid numbers.

“It’s been a challenging year to say the least, even to get this audit scheduled with so much COVID-19. The key takeaway from the audit is you guys are making decisions on a monthly basis based on financials that the business department provides, so when I do an audit six months after the fact, really to me, the point of it is so you guys know that what you are making decisions on currently is accurate, that you can trust your staff. With that said, we didn’t find any material adjustments or material weaknesses,” Cunningham said.

Following the report, Superintendent Alan Lumpkin recognized the Parents of the Year for the 2020-2021 school year.

Alicia Bryant was named the Parent of the Year for the Pearl River Central Elementary School.

Lumpkin said Bryant came from a small school in Texas and even though she was new to the school she jumped in with both feet and attended every event the PTO held.

Eli Ouder was named the Parent of the Year for the Pearl River County Middle School and the overall district parent of the year.

Lumpkin said Ouder is a father figure to many young men at PRCMS, is always present and willing to cheer on student athletes and that his support provides a solid base for the students as they approach their difficult high school years.

Kristina Sleik was named the Parent of the Year for Pearl River Central High School.

Lumpkin said Sleik goes out of her way to show her love and support for students and staff. Lumpkin added that the district is grateful to have such a parent who is willing to stand hand-in-hand with the staff in order to solve real life problems.

The Board then went about approving policy changes, the consent agenda and pay applications for ongoing construction within the district.

The Board then went into closed session to discuss a legal matter.