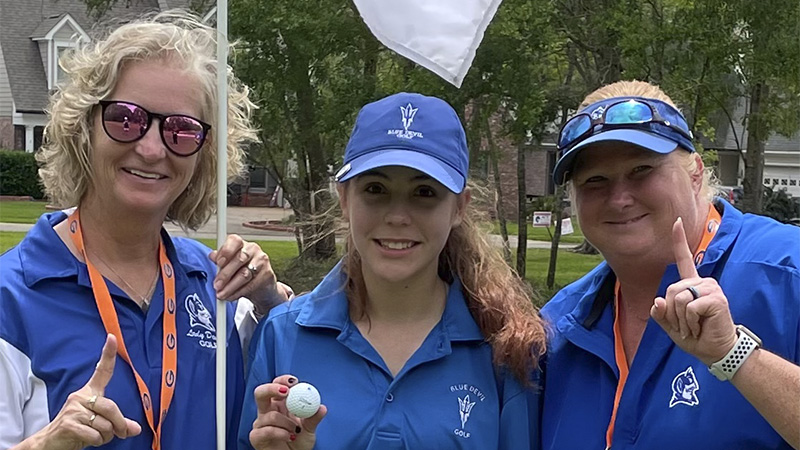 Hole In One: Grace Lanier poses with Coach Beverley Griffing, left, and Coach Shelly Dill, right, after nailing a historic hole in one at the state tournament this week. Submitted Photo.

Led By Grace Lanier, who shot an 80 in round one and 83 in round two, the team shot a 343 overall to come in second place.

Not only did Lanier set a personal best at the tournament, but she also made the All-State Team and hit a historic hole in one.

Lanier was the first girl to ever shoot a hole in one at the state championship and she didn’t just roll it in, it dropped directly in the cup.

“When I got the hole in one, because I’ve never had it before, it felt really nice to hear everybody clap and congratulate me,” Lanier said. Head Coach Shelly Dilly said losing out on the opportunity to compete last year because of the pandemic inspired the athletes to work even harder this season.

“Last year was such a disappointment. These girls were determined and they fought hard for this year. I had girls practicing in the rain, I had girls at Millbrook nonstop, going to Diamondhead practicing…they put in their hours,” Dill said.

The team’s success speaks for itself and has garnered attention from the students at Pearl River Central High School. Along with plentiful support from the administration and Athletic Director Chris Teal, Dill is hopeful this year’s results will entice more athletes to join the squad for next year’s season.

“A lot of people think golf is boring, but it’s not, and especially with the way our school supports us and promotes us I hope it’s going to bring in some more girls. We need more girls,” Dill said.

Lanier will be one of the returning athletes who will lead the team next year along with Molly Young.

Lanier said shooting a personal best and making the All-State Team helped vindicate the long hours she put in getting her technique right.

“It means a lot to me because I’ve put in a lot of work and practiced every day to prepare for state and try to get scholarships and stuff. For me to come back and score lower after I put all the work in I did over the summer, I was impressed with myself when I got the scores,” Lanier said.

Summer tournaments will be an important part of the offseason for all team members as they work to stay sharp now that the season is over.

Dill knows the talent her program has, so it’s just a matter of the players putting in the necessary time on the course during the offseason to maintain their skills.

“You should put a golf club in your hand every day. That one day you put it down makes a difference. You should constantly practice and give your all and that’s for any sport you do. Golf is not only a battle as a team, but also a battle with yourself and other individuals,” Dill said.