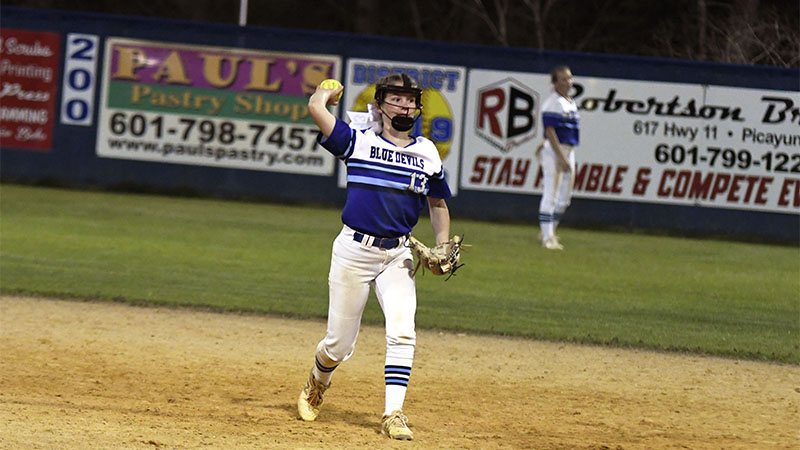 In The Dirt: Freshman Baylee DeVore winds up to throw to first during a recent PRC game. Photo by Jonathan Mitchell.

Pearl River Central’s Lady Blue Devils and the Long Beach Lady Bearcats were all tied up at the end of the 7th inning, but the Lady Bearcats secured the walk off win 7-6.

Bayli Cucinello pitched six innings while only allowing one earned run and struck out three after coming in as relief for Jazmin Robertson.

The seventh grader maintained her composure on the mound, and Head Coach Tony Labella said the showing was a step in the right direction for the young pitcher.

Madison Smith did a lot of damage from her spot in the middle of the lineup going 2-5 with two RBIs and two doubles.

Smith pitches and is the Lady Blue Devils’ starting right fielder. Labella said the junior’s team first mentality is what makes her such a vital part of the squad.

“She’s had a good offensive year. She’s one of the keys to our offense because we’ve been doing a pretty good job of getting on (base) early in the line up, then it comes to the hitters in the middle and she’s one of the key ones. She’s really unselfish and does what the team needs her to do that day,” Labella said.

However, even with the offensive damage done by PRC, the Lady Blue Devils left 13 runners on base against Long Beach.

It’s a pattern PRC has been fighting all season, and while having that many on base to begin with speaks to the team’s proficiency at the plate, the Lady Blue Devils have to find a way to get more runners home.

“That’s been a problem for us all season really. Our number (of runners) left on base for the season is ridiculous, but it just comes down to individual battles,” Labella said.

Winning those individual battles will become even more important when PRC travels to Picayune Tuesday evening to take on the Lady Maroon Tide in a district matchup.

PRC is currently 2-1 in district play, and picking up an away win against Picayune would inch the Lady Blue Devils a little closer to securing a playoff berth, while also giving the team some momentum before heading into a slew of non-district matchups.

“We tried to load the schedule as much as we could to get as much pitching before we play Long Beach and Picayune again. We just want to be hitting the ball well going into Long Beach the second time and get us ready for Picayune the last time,” Labella said.