PRC softball knocked out of playoffs by West Jones 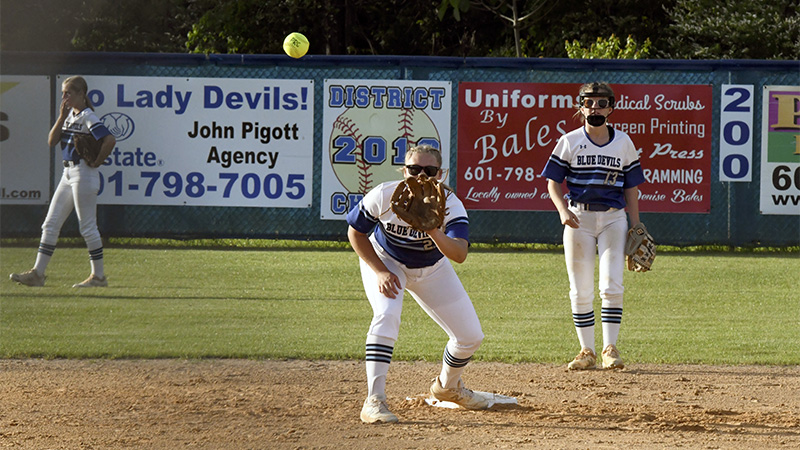 Out: PRC's players go through warm ups in between innings, which includes simulating throwing out a runner at second base. Photo by Jonathan Mitchell.

The Lady Devils took on West Jones in a playoff series earlier this week and ended up getting swept out of the postseason.

PRC lost game one 6-4 at home on Monday before traveling to West Jones Tuesday evening and losing 7-3 in the decisive game.

The team’s youth meant there were plenty of unknowns going into the year, but the young athletes stepped up and were part of a team that went 18-9 overall while going 5-1 in district play and earning a co-district championship.

It was also the first season of competition for the team after last year’s games were cancelled due to the COVID-19 pandemic, and Head Coach Tony Labella said this year’s athletes played in memory of those athletes who lost out on their senior year in 2020.

“I was glad for this year’s team that they were able to play things out and I think they really got it that they were blessed and had an opportunity the ones before them didn’t have. I think one of the things they were playing for was for those people who didn’t get to do it. We really appreciate this opportunity,” Labella said.

The squad didn’t have any choice but to mature quickly as the Lady Blue Devils competed against some of the best teams in the state and couldn’t afford to wait on the youngsters in the lineup to gain their footing.

However, PRC took any obstacles in stride and Labella said he was happy with how his young players progressed given the lack of experience.

“They got thrown to the wolves this year. The plan last year was that they would battle with varsity and would play junior varsity and would ease into being in this situation, but then COVID happened. It affected us this year because they didn’t have a year to see what everything is all about,” Labella said.

There’s plenty of hope for the future, but the responsibility of improving rests squarely on the shoulders of the players and coaches.

Labella doesn’t want his athletes to become complacent just because of this year’s good results.

“This just doesn’t mean that next year you’re better. It depends on how hard you work. With key players so young, they now know, ‘These are my weaknesses we need to fix before the next season starts.’ There’s no guarantee that just because we’re young we’re going to incrementally get better,” Labella said.

The summer will include some players competing with their travel ball teams, along with practices and summer games that will provide more opportunities for up and coming athletes.

“Everyone will play and especially the ones without travel ball. We know what positions we need to fix. There are very few positions on the field that are locked up. Just because you played a certain position last year doesn’t mean that’s where you’re penciled in the whole time,” Labella said.