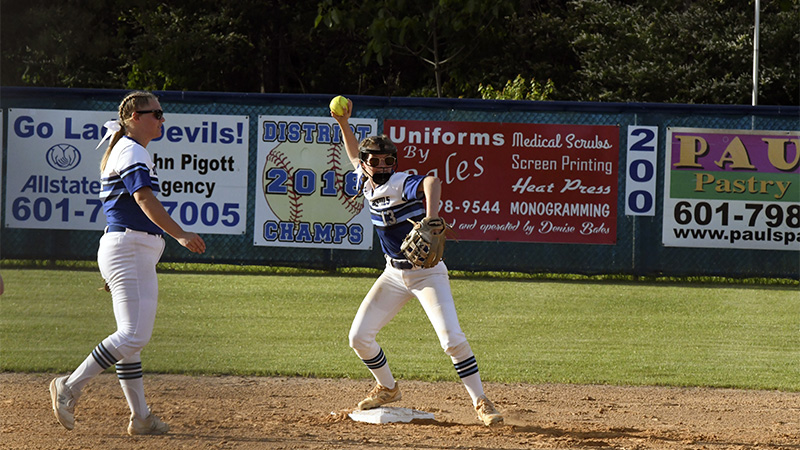 Double Play: Baylee DeVore tags up at second and prepares to throw to first base during Monday's playoff game against West Jones. Photo by Jonathan Mitchell.

Pearl River Central’s Lady Blue Devils battled hard, but ended up losing the first of a three game series against West Jones 6-4 Monday evening. The loss meant that when PRC traveled to the Lady Mustangs April 27 they’d have to win both games to advance to the next round of the playoffs.

Jazmin Robertson got the start on the mound and had to battle through some high-pressure situations, but was able to hold the Lady Mustangs to just four earned runs while striking out three.

Head Coach Tony Labella said the pitching situation was tricky because he was hoping to have Robertson available for the doubleheader as well, but in the end she had to stay out there to keep the game close.

“I thought she did well. The plan at that point in the game was that we wanted to have them both available tomorrow and they hadn’t hit Jazmin hard, but they had a few runs against her,” Labella said.

However, some defensive errors by PRC and good base running by West Jones allowed the Lady Mustangs to plate six runs on the night.

PRC was down 1-0 after the first inning, but bounced back with a two-run second inning catalyzed by Madison Smith, the junior went 2-2 on the night with two RBIs, who hit an RBI single to send a runner home before Callie Lee was able to score on a bad throw by West Jones. Now up 2-1, the Lady Blue Devils scored again in the third inning when Ashlyn Dean doubled to send Izzy Martin home.

However, West Jones retook the lead in the fourth inning by plating three runners before scoring another two runs in the top of the fifth inning.

PRC got a singular run home in the bottom of the sixth when Baylee DeVore was hit by a pitch with the bases loaded, but West Jones was able to get out of the jam and maintain the 6-4 lead through the rest of the game.

After the hard fought loss, Labella said he was happy with his team’s tenacity, even if it wasn’t enough to win the game.

“They just won a couple more battles than we did. That’s two really good teams out there. We had some decisions with cuts and things that cost us and we’ve had problems with that, but give them credit; they won more battles than us,” Labella said.

There were still positives to take away from game one, but Labella knows for his team’s season to continue his athletes are going to have to step it up. “To a person we have to play better. There was not one person out there who had the best game she could have, whether it be discipline at the plate or making a catch. We just have to play better,” Labella said.