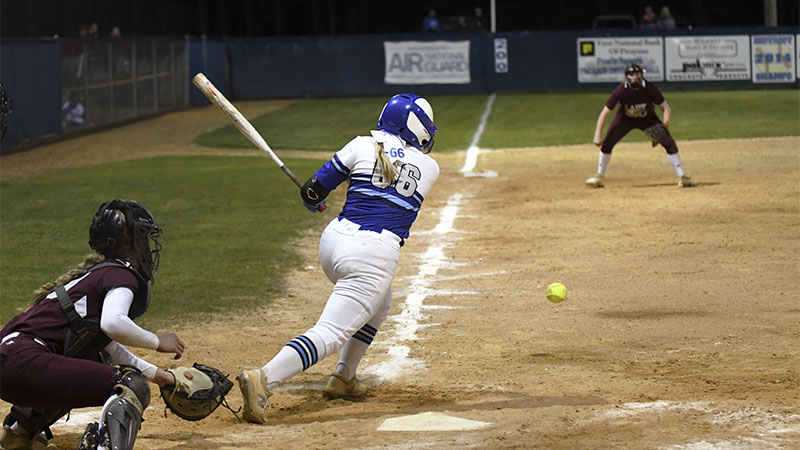 On The Ground: Jazmin Robertson slices a grounder down the third base line during a recent Lady Blue Devil game. Photo by Jonathan Mitchell.

Pearl River Central defeated Long Beach 6-5 in extra innings Wednesday in a game that was mired in controversy.

The Lady Blue Devils went into the game knowing they’d need to win by two or more runs in order to secure the district championship and number one seed due to Long Beach’s run differential advantage. PRC had a 1-0 lead early, but was down 5-1 heading into the bottom of the seventh inning with the Lady Blue Devils’ chances of winning dwindling with each out.

However, the Lady Blue Devils rallied and scored four runs to tie the game at 5-5 and send the two teams into extra innings.

PRC made it out of the top of the eighth inning without giving up a run and had runners on first and third in the bottom of the inning when things got heated. The Lady Blue Devils were at the bottom of their lineup, but needed to hit a two-run homerun in order to win and have the tiebreaker advantage. Knowing this, Long Beach decided to intentionally walk one player to load the bases, and then walked the following batter to send the winning run home for PRC.

This meant that even though PRC won the game 6-5, Long Beach claimed the number one spot thanks to the run differential tiebreaker.

The two teams finished with identical district records, but it was Long Beach who claimed the top seed on the night. PRC Head Coach Tony Labella said he understood Long Beach’s decision to purposefully lose the game and keep the tiebreaker in their favor, but the unusual nature of the strategy sparked some controversy. “Long Beach has a really good team and they’re well coached to get this far. I can’t fault the coach for doing what’s in the best interest of her kids, but will say this, I had calls from five or six coaches and not one of them said they would’ve done that. (Long Beach) has to do what’s best for them, but I wouldn’t have done that. I don’t blame her because obviously she’s done a great job, but when you hear that many coaches come out and say that, it’s like what are you shooting for?” Labella said. Long Beach had long been under the guidance of coach Scott Zink before he left the school last year for another position.

Zink’s Long Beach and Labella’s PRC team were rivals for years, and that rivalry set the Lady Blue Devils’ expectations where it would’ve been hard believe that situation would’ve occurred with Zink at the helm. “We were rivals but good friends. They were good way before we were and we tried to be like them. This is the first year with him not there and I know he would’ve played that game through. We would’ve just played it out. We wouldn’t have expected that to happen because we would’ve wanted to beat each other so badly,” Labella said. Bayli Cucinello went 2-4 with two RBIs while Jazmin Robertson dominated on the mound only allowing two earned runs over eight innings, but in the end, the game is over and the results stand as PRC being co-district champions with Long Beach, but holding the number two seed.

This season has seen the young Lady Blue Devils battle through all types of adversity, and this will be another obstacle for the athletes to overcome as they prepare for their playoff matchup against West Jones. PRC’s lineup has several young players in it, but at this point the athletes have been in enough pressure situations, including the game against Long Beach, to understand how to handle the weight of a playoff series.

“We’ve been in a lot of close games and I know there’s nothing like the playoffs, but if we get beat it’s going to be because they’re better. I’m not going to blame the experience. When you’ve played 20 something games this season, a freshman isn’t a freshman anymore. I think they’ll be nervous, but I think what happened (against Long Beach) was so intense that once you put it behind you it makes you better,” Labella said.