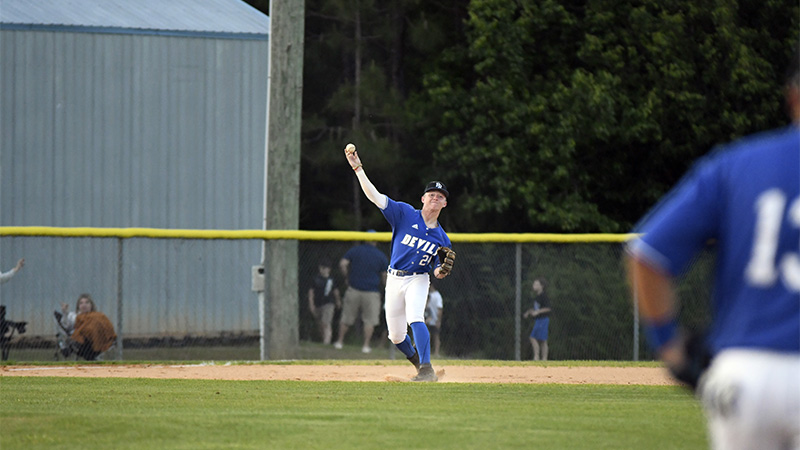 Big Arm: Ethan Songy launches a ball from third base to first during warm ups. Photo by Jonathan Mitchell.

The matchup was the final game for the Blue Devils in preparation for the start of playoffs next week, and Head Coach Neil Walther said it was a good, challenging game to end on.

“(The game against East Central) was very ugly, so hopefully that was an eye opener because that isn’t acceptable. But winning ugly is better than losing pretty I guess,” Walther said. The team is only 24 runs away from breaking a school record for runs scored, but the Blue Devils have only hit four homeruns all year. This perfectly illustrates the team’s offensive philosophy of being selfless at the plate and forcing opposing defenses into making mistakes.

“We’re not doing this by hitting doubles, home runs or knocking it off the wall. We’re doing it by putting it on the ground, moving runners and applying pressure. As long as they battle at the plate (we’ll be alright),” Walther said.

The victory also extended the team’s win streak, which is now up to nine games. While these past few matchups have been meaningless in terms of affecting playoff positioning, they were important in keeping the momentum rolling in PRC’s favor as the team heads into the postseason.

“We want to win all the games we play, but I think it’s big that we just keep going. It’s a sign of a good team that when you don’t play well you still win. You can’t do that very often, but we are fortunate enough to have enough talent that if we’re not playing our best we still have a shot. However, as we go on into the playoffs that chance of winning while not playing well diminishes greatly,” Walther said.

The Blue Devils likely won’t know who their playoff opponent is until the end of this upcoming weekend.

Once the Blue Devils have that information, there may be some specific talks within the team on how to handle the opponent’s strengths and weaknesses, but for the most part the Blue Devils are worried about their own performances, not the play of others. “If we gather some information that we think we need to touch on this or that then we’ll do that. We do that even during the regular season, but I’m having enough trouble to have the kids execute the things we do regularly the right way, so we don’t really share scouting reports. But we will be as prepared as we possibly can,” Walther said.