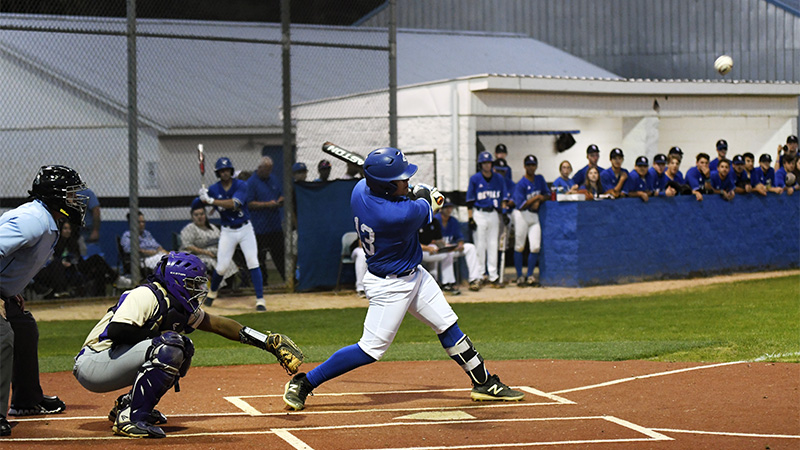 The Blue Devils have now won seven in a row and used the matchup against George County as a way to keep the athletes competing before heading into the playoffs.

Going into the game, Head Coach Neil Walther planned on using multiple pitchers to prevent any of the athletes from becoming fatigued in a game that had no impact on PRC’s postseason seeding.

Caleb Dyess ended up going three innings to lead the Blue Devils and allowed zero earned runs while on the mound.

PRC was led by Caiden Shoemake offensively who went 3-4 with an RBI against the Rebels.

However, it’s the team’s defense that showed up with a solid performance; the Blue Devils only committed one error.

“90 percent of our practice is offense and most teams do that, but we had extra emphasis on defense. We did an extended defensive session at the end of practice today and they looked a lot better at the end than they did at the beginning. There’s no doubt they have the skill because most of them have been out there for several years. It really just comes down to if they have focus,” Walther said.

Walther purposefully scheduled the George County game, along with two other matchups this week, because he wants to keep his athletes sharp heading into the postseason.

Not only does it allow Walther to do some adjusting with his pitchers and lineup prior to the playoffs, but it also keeps the athletes in a competitive mindset that might’ve taken a hit if they’d gone an extended period of time without playing.

“There are two primary reasons (why we scheduled tune up games). One is so we can continue to get at-bats so the kids are seeing live pitching, and (two is) to get pitchers work. We play (Tuesday) and Wednesday, and we plan on throwing seven pitchers in those games just to get them work and to stay sharp,” Walther said.

The Blue Devils will travel to Gulfport April 27 for their next preparatory game.