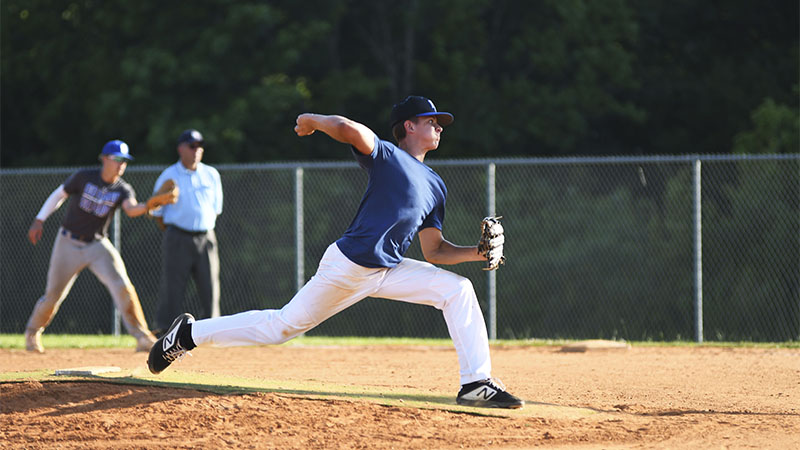 No Quit: Heath Brunson throws a pitch during a summer game. Part of the Blue Devils’ success comes from the work done before the season and in practice. File photo by Jonathan Mitchell.

Another game and another win for the Pearl River Central Blue Devils as the team handily defeated Long Beach 14-2 Monday evening.

All of the players got in on the action offensively and the game only lasted five innings due to a run rule.

Cam Brunson was one of the many contributors at the plate going 1-2 with two RBIs and a double.

One of the team’s few seniors, Brunson has overcome injury to be one of PRC’s offensive leaders.

“He came back in the lineup game against Hancock when we played them on a Tuesday and if you look at our run production from that point in the season and prior, there’s a big difference. He adds a lot for us there and he brings leadership because he’s been there, done that,” Head Coach Neil Walther said.

Caleb Dyess and Nolan Walther shared the pitching responsibilities and struck out seven combined during the course of the game.

The win was PRC’s fourth in a row and kept the team’s district record at a perfect 7-0.

The Blue Devils have been dominant all season and have only lost two games, which has generated some buzz.

Maxpreps.com has the team listed as the sixth best in the state of Mississippi, but Walther said all of the outside noise doesn’t affect the athletes.

“I never discuss it with any of the players and they don’t discuss it with me. As far as discussing with each other, they may do that, but we’re not looking at that stuff,” Walther said.

Currently sitting at 21-2 overall, there’s been plenty of positives this season for the Blue Devils.

Wins started piling up earlier in the season during a 15 game winning streak that was just broken two weeks ago.

Walther said the success breeds more success and the team’s experience plays an integral role in keeping the wins coming.

“That stuff becomes contagious and a lot of it does have to do with experience. They don’t push the panic button. These guys have played a lot of games and a lot of games together. Dynamics change each year but we have less of it because they’re used to each other,” Walther said.

Considering the team’s record, complacency could begin to creep in so Walther and his staff are making sure the players bring the right amount of intensity every game, no matter the opponent.

“You always worry because kids in general think they can turn things off or turn things on easily. We’ll come up with ways to make it important, but we won’t have to do that for the Picayune game and we’ve never had to get them up for a Hattiesburg game. For the non-district games we’ll tell them to play strong and we have different anecdotes of teams we can use,” Walther said.