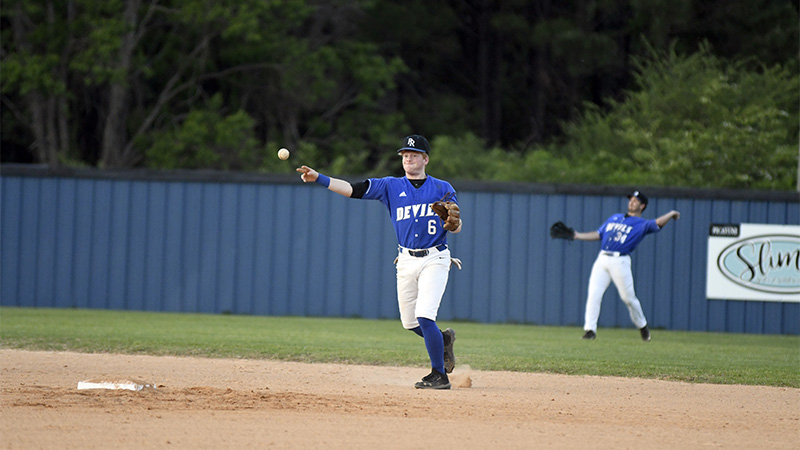 Making It Look Easy: Nolan Walther side arms a ball to first base during a recent Blue Devil game. Photo by Jonathan Mitchell.

Kyler King got the start on the mound for Picayune and went 4 1/3 innings with two strikeouts and five hits.

The freshman held a powerful PRC team in check and Head Coach Evan Nichelson said the pitcher’s development this season has been a positive for the team.

“We preach it all the time, get better every single day and don’t let the outcome of things dictate how you go about your business. It’s a marathon, not a sprint, and he’s done a good job of that since day one. He’s night and day as far as being a competitor, being able to flush things when things go wrong, turn the page and keep competing. He’s really grown this year,” Nichelson said.

King also went 1-4 at the plate with an RBI against the Blue Devils.

Picayune has struggled for wins at times this year, but the team is constantly growing and improving as the youthful athletes get more experience.

The current priority is continuing that maturation process and allowing players to get as many varsity reps as they can.

“Having a rough year like we are, you have to find the positives and harp on the positives, and there are a lot of things going right. Guys like (senior Austin) Samples have set an example. He’s playing his tail off no matter the score and our kids are watching. He’s setting the precedent for how we play. He’s going to be a big part of what happens in the future even though he’s not here,” Nichelson said.

The Blue Devils were in control for most of the game and were led offensively by Caleb Dyess who went 2-3 with a triple and three RBIs against the Maroon Tide.

Head Coach Neil Walther said his players did a good job of executing at the plate and taking advantage of Picayune’s few mistakes.

“We think high school baseball games are won on the ground and we did that. We hit some balls at people and (Picayune) made some plays early on, but high school teams are going to makes mistakes and that’s what we base our offense on,” Walther said.

The Blue Devils have scored 10 or more runs in 13 of their 25 games this season and part of that offensive success comes down to the team’s philosophy at the plate.

Players know they don’t need to smash a ball out of the park, but can instead be methodical and force opponents to play perfect defense, which is what happened against the Maroon Tide.

“I think the kids buy into it. Early in the year when we struggled scoring they wanted to do it their way, but when you play enough games where you score four or five and go back to, ‘This is how we do things.’ And then put up double digits they buy in,” Walther said.