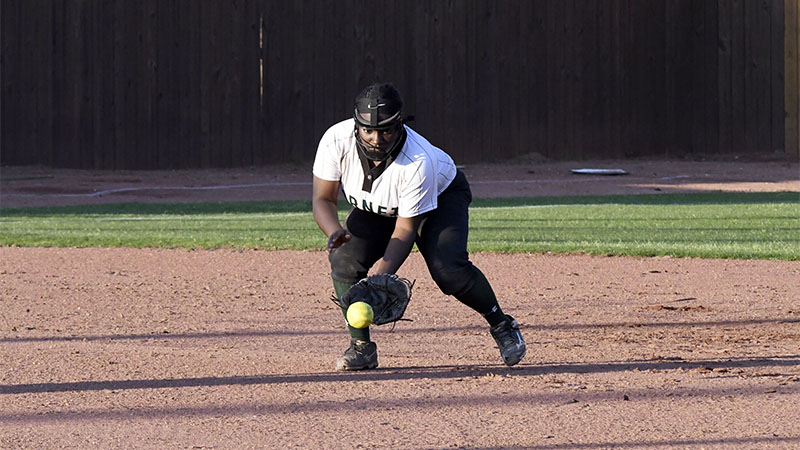 On The Hop: Denasia Fulton leans down to field a grounder during a recent Lady Hornets game. Photo by Jonathan Mitchell.

After a bounce back 10-4 win against Forrest County last Thursday the Lady Hornets fell to Purvis 8-4 the following night.

The loss means the team will need to win its two final district games and get a little help from other results in the district to secure a playoff spot.

The Forrest County game served as senior night for the Lady Hornets and was a stark reminder that last year’s seniors never got the opportunity to have a ceremony due to COVID-19 season cancellations. Head Coach Janessa Deckwa said getting to celebrate the team’s seniors meant more because of last year’s unsatisfactory ending.

“I feel like they enjoyed it. It was a really good night, a good win and they were excited to play. Seniors last year didn’t get that, so to have that night and make it there without getting shut down and have the opportunity to recognize them was nice. I think they’re definitely thankful to have it this year,” Deckwa said.

Kaitlynn Schonewitz went 3-4 with three RBIs while Lily Tynes pitched all seven innings and struck out two in the Forrest County victory.

The win over Forrest County helped get the team in the right headspace going into the crucial Purvis game, but the Lady Hornets couldn’t quite pull out the victory.

“I feel like we got a bit of confidence in that game, and felt ready for Purvis, and we just, again, made some defensive mistakes and couldn’t really hit. I think we made four defensive errors and the combination of that with inconsistent hitting kind of lost it for us,” Deckwa said.

Costly defensive errors have been an issue for Poplarville this year. There are several contributing factors, but either way it’s something Deckwa wants to see cleaned up heading into the season’s final district matchups.

“I think confidence has a lot to do with it. I think our mental game has suffered a bit. They do kind of shut down mentally and don’t make the right decision in the moment. It’s all about being able to perform in the moment and make quick decisions. Position changes and lack of experience, the combination of the two has increased the chances of those things happening,” Deckwa said.

Lana Welborn went 2-4 with an RBI and Tynes pitched a complete game while striking out four in the Purvis loss.

The Lady Hornets have first year starters scattered throughout the lineup and it’s been all about learning on the fly for the young athletes this year as they’ve dealt with a tough schedule.

However, the losses and mistakes being made this year will in turn help develop a battle tested group as the players get more innings under their belts.

“I think it has gotten some younger ones some really fast experience. They may not feel that way because it can be tough some nights for us and the players. It can be pretty discouraging some days, but looking at the overall bigger picture we’re getting young pitchers a lot of experience. Some of these athletes that are in their first year getting to play, getting some of that time, so maybe next year we won’t have to deal with the nerves part of it as much,” Deckwa said.