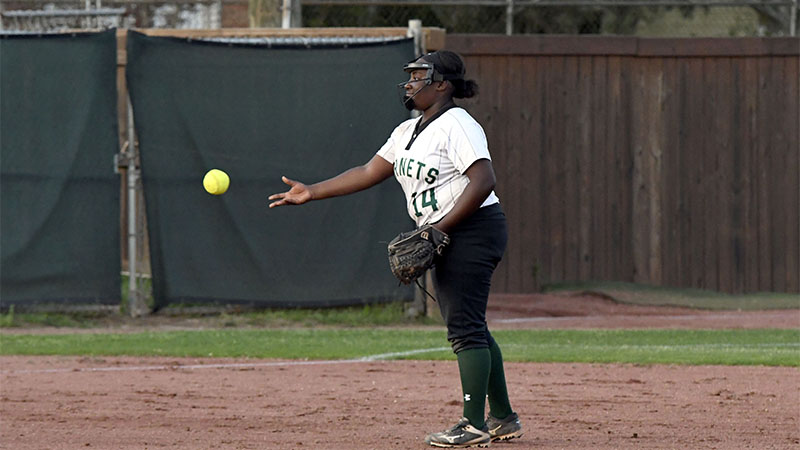 Easy Throw: Denasia Fulton tosses the ball back to the pitcher after catching a fly ball. Photo by Jonathan Mitchell.

The Poplarville Lady Hornets needed to defeat Greene County last week in order to secure a playoff berth, but ended up losing the regular season finale 3-1.

The loss knocked Poplarville out of playoff contention, and Head Coach Janessa Deckwa said the players were emotional after the game.

“They were upset, naturally, with that being their last game. I think even the ones who aren’t seniors were upset for the seniors because we had a chance to win that game. We had an opportunity to take it and we didn’t and they finally felt it,” Deckwa said.

Cassidy Cartwright went 3-3 at the plate while Lily Tynes went six innings on the mound and only allowed two earned runs.

It was a tough send off for the team’s three seniors, but the majority of the team will be returning, which bodes well for next season.

“I’m thankful we got this year. It didn’t work out the way we wanted it to, but the future is really bright for us. We have a lot of young athletes that are developing well and I’m really excited about next year,” Deckwa said.

The 2021 season took place against the backdrop of a worldwide pandemic as COVID-19 affected everyday life.

It wasn’t an easy situation to deal with, but the Lady Hornets adapted to their new reality and overcame a lot of adversity during the unusual season.

“I was kind of walking on eggshells all year waiting on the next thing to happen just because of the circumstances. We did battle plenty of quarantines for individual players early in the year and you just hold your breath when the season starts. It’s been an up and down year with a lot of things going on. I’m thankful we didn’t get hit hard. We were able to control it and able to dodge a bullet,” Deckwa said.

The team’s seniors were integral in creating an environment where the athletes did what was necessary to prevent the spread of COVID-19 and keep calm during games.

It wasn’t an easy task, but Deckwa said those veteran athletes left a lasting impression on their teammates and the program as a whole.

“I think it sets the tone for the younger ones and gives them an example to follow for the coming years. Our seniors were very laid back and stayed under control, and I think our younger players were able to see that and see that composure. They did really well handling it and I think they’re a good class to set the foundation for our younger players,” Deckwa said.

Those younger players who will be returning next year will now have the entire summer to take part in travel ball games, team camps and one-on-one coaching sessions that weren’t possible in 2020 because of the pandemic.

Development was hindered last year, so now the players will look to make up for lost time.

“I think it’s huge that they continue to play. I’ll have even more players stepping in next year to start for us that didn’t get to start this year. I just really encourage them to see that game atmosphere as much as they can throughout the summer to help them get developed and have a head start on that before they come in, in August,” Deckwa said.