Poplarville softball bounces back with a win 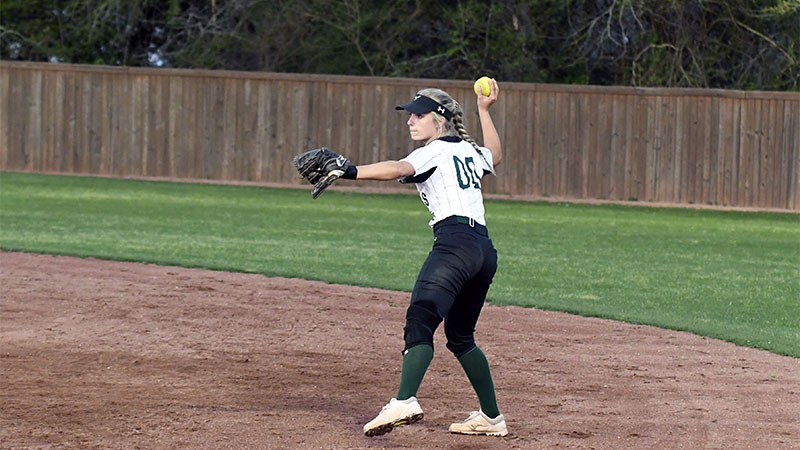 In The Dirt: Madison Rester gets ready to throw to first base after fielding a ground ball. Photo by Jonathan Mitchell.

The Poplarville Lady Hornets needed a win Tuesday evening to stay in the playoff race, and did just that beating Forrest County 6-2.

Lily Tynes was dominant on the mound and allowed zero earned runs in seven innings of pitching.

Sarah Rawls stepped in for an injured Denasia Fulton and was exceptional at the plate going 2-3 with two RBIs.

The victory may not have been the cleanest of performances from the Lady Hornets, but all that matters was getting the job done.

“It was kind of a messy win, but they worked through some adversity. Things weren’t falling for us like they should have and we had some battles we had to get over, but they finished up. Overall I can accept it. Not the prettiest win, but a win we needed,” Deckwa said.

Poplarville was aggressive on the base paths and had nine stolen bases on the night.

The Lady Hornets were able to find Forrest County’s weaknesses and punish them for it, which in turn made it easier for the Poplarville athletes to drive in runs.

“We’ve stolen a lot of bases this year. We want good base running to be part of our game plan because of the pressure it puts on other teams and the momentum it gets for us when we’re aggressive and take extra bases. Our hitting has been up and down, so when we do get somebody on base we’re having to push to get them in scoring position,” Deckwa said.

Rawls hasn’t started for the team since the beginning of the season and she usually functions as a pinch hitter and utility player that can be plugged in wherever Deckwa needs her.

Getting the two RBIs was crucial for the Lady Hornets and having such depth on the team benefits Deckwa when a player goes down with an injury.

“Sarah filled in for (Denasia Fulton) and did really well. She battled some nerves early in the game but held it down and got a double play towards the end of the game at third. Her role right now is helping her team out where we need her and I really enjoy having players like that, that can step in and fill a role when needed,” Deckwa said.