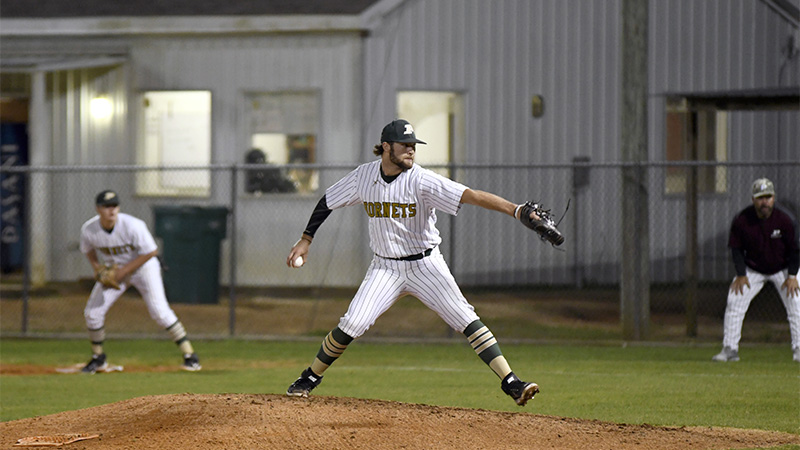 Another Strong Performance: Jordan Belsome winds up to pitch during a recent game. Photo by Jonathan Mitchell.

The Poplarville Hornets lost a defensive slugfest to Sumrall 1-0 last Friday as both pitchers dominated the game.

Jordan Belsome went six innings for Poplarville and only gave up three hits and a walk, but offensively the Hornets couldn’t get anything going.

Eli Goodwin, Mason Anderson and Quentin Baker provided the three hits Poplarville had against the Bobcats, all of them singles.

Both teams had to work to manufacture any offense and in the end it was Sumrall who was able to do what was necessary to plate a runner.

“It really came down to whose ground ball was more towards the hole (in the infield), and that’s championship baseball. That’s what it’s like. We played well enough to win. We didn’t beat ourselves, they just did some things (that earned the win),” Head Coach Slade Jones said.

Poplarville is in a tight race with its other district opponents as every team already has a district win.

Getting a win over Sumrall would’ve put the Hornets at 2-1 in district play, but instead a singular run left Poplarville with a loss.

Jones said games like the one against Sumrall show just how intense district competition can be when playoff positions are on the line.

“One pitch is very important in high school baseball, but that’s kind of hard to see unless you’re in there watching every pitch… it’s all about adding and subtracting runs,” Jones said.

The season has had its challenges, aside from the omnipresent COVID-19 pandemic.

Poplarville has had to shake up the lineup due to injuries, but the team doesn’t have time to wait for the new starters to get their feet underneath them.

“We’re getting better with every pitch, but it’s getting to the point where we need to start putting wins together. There have been some curve balls (this season),” Jones said.

Poplarville won’t get any sympathy from its opponents just because the team had a few injuries, so it’s the next man up for the Hornets.

Jones needs his players to buckle down and start stringing wins together.

“All of this other stuff we have to overcome. We have to battle and put ourselves in a position to win,” Jones said.