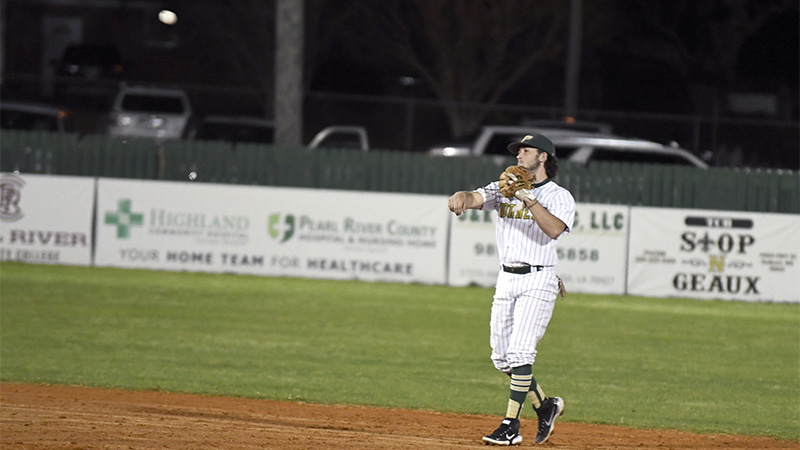 No Errors: Poplarville's defense has tightened up over the past few weeks as the team takes on district opponents. Photo by Jonathan Mitchell.

The Poplarville Hornets took on the Purvis Tornados Tuesday evening and lost 5-0 on a night where it was tough to get anything going offensively.

Nate Anderson went 2-2 and had a walk, but the Hornets were only able to scrounge up three hits against a solid Purvis defense.

Head Coach Slade Jones said his team didn’t have any costly mistakes, but certain breaks went the Tornados’ way during the district matchup.

“Defensively we were really sharp. We had no errors and it wasn’t one of those games where we beat ourselves. We hit a lot of balls hard, but we hit it right at people. So did they, theirs just fell,” Jones said.

The Hornets offense hasn’t been as high powered as the team would like and Jones is working with his players to put more runs on the board.

“You hate to say just everything is based on luck, but we hit several balls that if they’re two feet to the right we score three runs and it’s a totally different outcome. We’re not going to change anything we’re doing. We could nitpick a couple things we did or didn’t do that could’ve been the difference with one run or two runs, but that really doesn’t illustrate the game well,” Jones said.

Even with the loss, the Hornets remain in control of their own destiny when it comes to securing a playoff spot.

Poplarville may not be clicking offensively right now, but there’s still time to get back in the rhythm of things as the Hornets fight for better seeding.

“I don’t think anybody is panicking. I think we know we’re doing the right things; we just have to get more timely hits. Our hits aren’t leading to runs. We’re getting them with nobody on base. We have to find a way to maybe get an extra base here and there so hits can turn into runs,” Jones said.

The Hornets barely lost in these close district matchups, and in a sport like baseball where the margin for error is so thin the athletes know if a few things go their way they can get back on track.

Jones has some experienced players at his disposal that can help turn things around on the field and also keep the younger athletes even keeled during these high pressure games.

“It’s just come down to one or two at bats. I think they know that, their baseball IQ is high. They know they’re not beating themselves at this point. We’re just not getting timely hits.

I don’t feel panic at all. I feel more like they’re trying to prove themselves every time they go out there. I bet they have a chip on their shoulders (at this point),” Jones said.