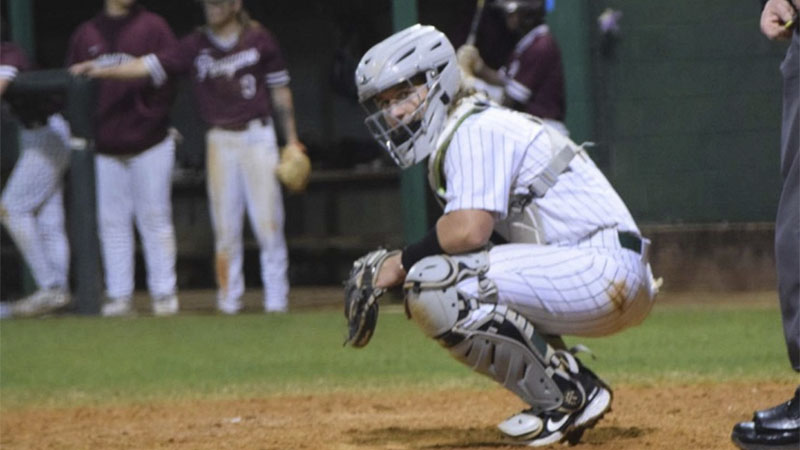 Behind The Plate: Catcher Malley Bilbo looks to the dugout for a specific sign during a recent game. Submitted photo.

The Poplarville and Pearl River Central baseball teams took part in a doubleheader Saturday with the Hornets winning the first matchup 4-0 and PRC earning a 10-8 victory in the second game.

The Blue Devils offense came alive in the second game with Caleb Dyess going 2-3 with four RBIs while freshman Chris Hart stepped up in a big way going 3-3 with two RBIs.

Head Coach Neil Walther said his hitters did a good job of rebounding in the second matchup and were able to find a way to put 10 runs on the board.

“With all of them, I don’t think the situation is ever too big. I think they kind of quit going with the approach they need to have. Our offense is going to revolve around moving the baseball on the ground, running, bunting and I believe that’s the way you have to play because eventually you’ll run into a pitcher where that’s all you can do anyway,” Walther said.

Hart’s emergence was a major positive that came out of the two matchups.

“The best thing about the weekend was we had a freshman go into game two and go 3-3. We found us a guy there. He’s been having good practices and then had an outstanding game. He’s another guy we can use, not only right now, but he’s a guy that maybe starts by the end of the year,” Walther said.

Joseph Blakeney went five innings in the first game while only allowing two hits and striking out nine PRC batters.

Meanwhile Malley Bilbo and Riley Passman guided the Hornets offensively as Bilbo went 1-3 with an RBI and Passman went 2-4 with two RBIs.

The second game saw Nate Anderson pitch four innings with seven strikeouts while also going 2-4 with an RBI at the plate as Poplarville ran out some players to get experience in the two non-district games.

Head Coach Slade Jones said going up against PRC served as the perfect opportunity for his team to stay sharp while also studying an opponent that resembled other teams in the district.

“At a certain point in the year we want to make sure teams we’re playing against are going to simulate teams we’ll play in district. PRC is a team that’s going to make plays on defense and is sound fundamentally. We want them to make us pay if we’re not doing the right things on Saturdays,” Jones said.

The games were in preparation for an important district matchup against Greene County April 6.

Considering the level of competition, Poplarville knows a win is necessary for the team to stay in the hunt for a playoff spot.

“Greene County is a prototypical 4A team. They’re going to be really fundamental, put balls in play and throw strikes. They’re one of those teams that, once you factor in a big arm, can be hard to beat,” Jones said.