Picayune track shows out at regionals 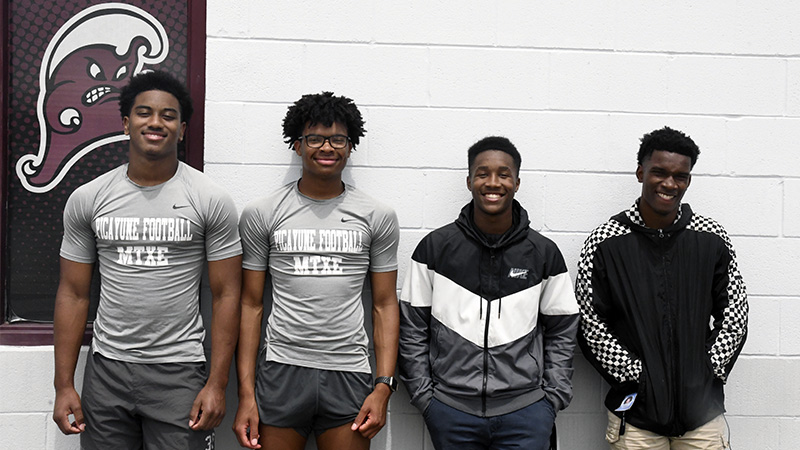 Up Next: From left, Dante Dowdell, Noah Carter, Jessiah Conte and Josh Tatum are all part of the Maroon Tide track and field team that will take part in the south state meet April 24. Photo by Jonathan Mitchell.

The Picayune Maroon Tide track and field program is moving on to the south state competition after coming in second place at the regional meet behind Hattiesburg.

Coach Seth Hayden said his athletes were prepared and put on some great performances even if to the casual observer the events seem simple.

“I was really impressed with how they competed. They went out there and ran hard. Some people think it’s just running, but it’s hard to run hard, run fast over those distances (multiple times in a meet). It does take some type of skill and guts, and I’m really proud of how they performed,” Hayden said.

There are only a few seniors on the squad, which means the majority of the top placing athletes will be returning next year.

Hayden said having such a young core bodes well for the Maroon Tide beyond just this season.

“It’s very exciting to be part of the track program. We pride ourselves on putting together a good team as far as individual runners and relays,” Hayden said.

Workouts are about to be taken up a notch as the athletes begin preparing for a win or go home meet at south state on April 24.

Previously, the practices were focused on building stamina and get the athletes physically prepared for the competitions.

Now Hayden is going to have his athletes concentrate on the intricacies of their individual events rather than attack the practices with a broad point of view.

“We’re now tailored towards fine tuning starts, handoffs in relays and not so much about getting them in shape. Now it’s about preparing them and working on technique. There will be more attention to detail, especially with relays where hundredths of a second could be the difference,” Hayden said.

Even with the pressure filled environment the athletes are now preparing for, the team’s mindset won’t change. Hayden has high expectations, and the talent is there for the Maroon Tide to have a good showing at south state.

“I feel like we’ll have some relay teams and a few individuals in individual meets that will place in the top four and will represent heavily at the state championship. I feel very confident in our guys’ ability. Once we get to the top four and the state championship we’ll just go all out and try win it. They’ve worked hard. I’m very proud of them and I’m excited we actually got to have a season considering last year all of the spring sports were cut down due to COVID-19,” Hayden said.