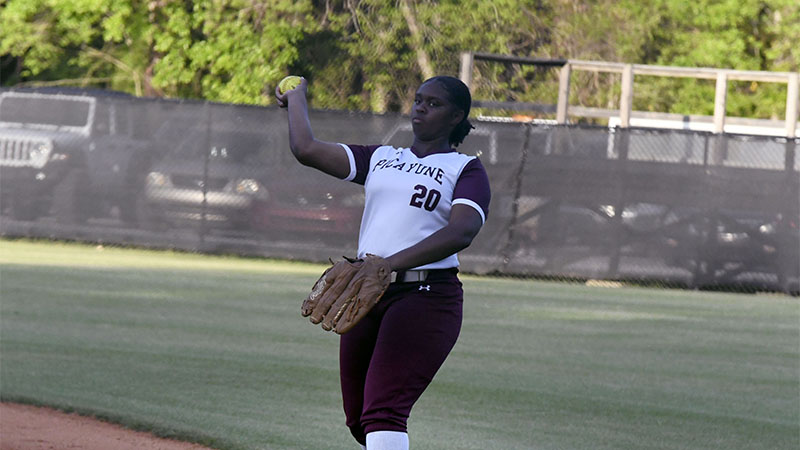 The Lady Maroon Tide was knocked out of the playoffs after losing a home game against East Central Monday evening 11-0 and losing to the Lady Hornets 7-2 Tuesday night.

Head Coach Courtney Dickens’ message after game two was simple considering the team had been heavily beaten the night before.

“I told them that I was proud of them for not giving up. You get 10-run ruled (Monday night) and could’ve easily gone over there and said, ‘We’re not going to win.’ We could’ve gone over there with a bad attitude, but I think they played hard and tried to win that game,” Dickens said.

Getting to the playoffs and having that experience, a first time situation for the majority of the players on this year’s team, meant a lot since last year’s season was cancelled.

Dickens talked with the squad’s seniors before the season started, saying there would still be a possibility of this season being shut down too if COVID-19 case numbers started spiking again.

That realization led to even more of an emphasis on enjoying time with teammates and the competition they take part in.

“With the way times are now you never know when they’ll say we can’t play anymore. I’m very grateful to get to finish out the year with them and thankful they stuck with it. It’s not the best season, not the season we had hoped for, but those seniors I’m proud of for not quitting on me, or their team. I think there’s a bright future for all four of those girls,” Dickens said.

The athletes will now enjoy a deserved break after a very busy season.

The work ethic of her players impressed Dickens because not a single athlete complained about the hectic schedule.

“We’ve been going hard and I haven’t given them a single day off and that’s something else I can commend these girls on. They were at practice every day and we didn’t have any trouble with people missing practice. That says a lot about those seniors as well,” Dickens said.

However, the break won’t last long.

Tryouts are set for May 6 and in June the team will practice several times a week while also playing summer games every Tuesday and Thursday of that month.

Dickens wants to make sure her players stay sharp and work on any areas that need shoring up over the summer.

After not having an opportunity to have a full summer last year, Dickens is making sure her players get the necessary reps during the upcoming months to continue improving and developing.

“I think it’s definitely going to make a difference. With some of these kids we played our last game in mid-March (of 2020) and some of these kids didn’t play again until January (of 2021) and that’s a long time. I think that had a negative effect on a lot of kids because that’s a lot of growing you can do. You can get so much better in that amount of time,” Dickens said.