Picayune golf dominates district tournament to move on to state 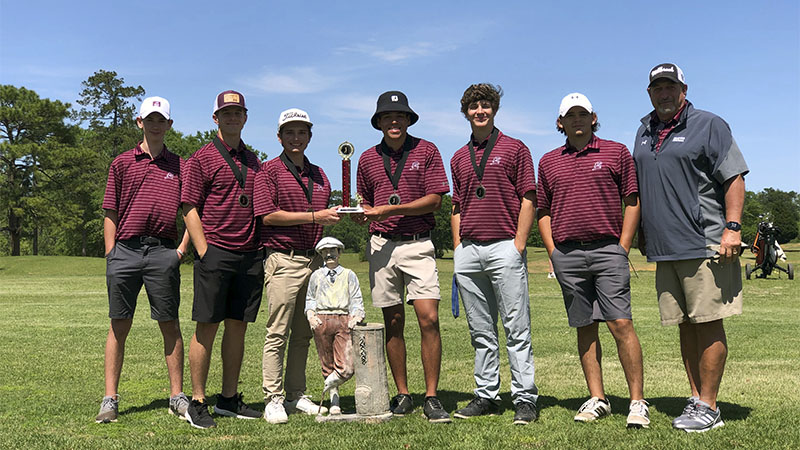 Going To State: The Picayune Maroon Tide golf team poses with its trophy after dominating the district tournament and coming in first place. Submitted Photo.

The group shot a 313 as a whole at Millbrook Golf and Country Club, and was led by Cam Guidry who shot the best individual score at the tournament with a 72.

The rest of the team was close behind Guidry with Tim Turnage shooting a 77, Isaac Hickman an 81, Nate Hickman an 83, Mark Griffiths an 88 and Jacob Frich shooting 123.

Coach Mark Summers said the weather conditions were less than ideal with the ground soaked over night by heavy rain, but the tough environment didn’t prevent the team from coming in first place.

“The day we played the course was really wet and I thought they did a pretty good job of playing through the wet conditions. Our scores would’ve been a little better, but other than that we just have to practice and get a little better to compete for state. 313 is ok, but we need to be 305 or lower. We can do it,” Summers said.

The mental side of golf is just as important as the physical aspects and Summers knows this.

His group of athletes is made up of four seniors, so there’s plenty of experience in the squad.

The athletes know what it takes to win, and the lack of nerves helped contribute to the scores at district.

“Three of them have been playing since seventh grade. They’ve been to plenty of tournaments and played a lot of golf. They’ve played well over their high school and junior high careers,” Summers said.

Guidry is one such player having started playing the game as a young boy.

The Southern Miss commit played well at the district tournament and Summers said the player’s future is bright.

“Cam Guidry won the local golf course championship when he was 12 going against grown men. He’s been a good player for a long time. There aren’t many players who are going to outwork him and it’s going to pay off for him. He has good things coming to him,” Summers said.

Before heading to the state tournament, there are a few things Summers would like to see his golfers improve upon.

“They can always get better with chipping and putting. The game of golf played is from 100 yards in. By the time they get to this level everybody can hit off the tee box, but the game is really played from 100 yards in with wedges and putters,” Summers said.

Seeing as there’s plenty of talent in the squad, and that the athletes are experienced, Summers is hoping the Maroon Tide can turn some heads at the state tournament.

“I would love for us to just be in the running after the first day. It’s a two-day tournament. I’d like to be in the top five and we’ll just compete. These boys have played a lot of golf, a lot of tournaments, they know what it takes,” Summers said.