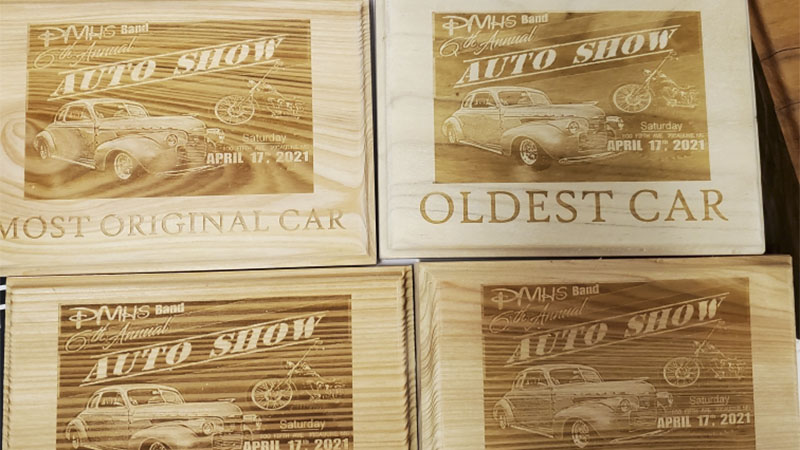 Awards: There will be several categories cars can win awards in at the PMHS band car show. Submitted photo.

Fans of classic cars are welcome to come to the PMHS Maroon Tide band’s car show fundraiser April 17 with a chance to win awards and take in the beauty of vintage cars.

It’ll be the sixth time the band is hosting the fundraiser after the 2020 iteration was cancelled because of COVID-19.

There will be a 50-50 raffle, a cake walk, bake sale and a variety of vendors at the show that’s set to take place in the parking lot outside Lee-Triplett Stadium.

The show will take place from 9 a.m. to 1 p.m. with the award show set to take place at 12:30 p.m. Awards for cars will be issued in seven categories.

The trophies have been hand welded by automotive students at PMHS and there will also be plaques given to the owners of the first 30 cars entered.

It costs $30 to register a car, truck or motorcycle. Organizers hope a lot of community members come out because running a band program isn’t a cheap endeavor.

“Some of our biggest bills that we have we do to keep operating are for our marching season; dry cleaning of the uniforms is a huge expense of band. Feeding the kids is a large expense. Money goes into our show, props and also money goes into paying outside people to offer lessons to our students,” Band Director John Cockrell said.

The hope is that the show can make up for some of the lost revenue caused by the pandemic.

The band missed out on fundraising during the spring and summer of last year, and was only recently able to really get going in January.

Cockrell said the car show will help pay for expenses and also make up for lost fundraising opportunities.

“We weren’t able to fundraise until January, so we’re having to double fundraise to make up for stuff. Whether (COVID-19) happens or not, things still cost money. It still costs a lot of money to operate the band and we have to have the funds to operate,” Cockrell said.

The funds will also go to scholarship money that will be given out to the students at the band banquet.

Usually there’s one $500 scholarship is awarded, but since last year’s banquet was cancelled $1000 in scholarship money will be given to band students this year.

There is a possibility of rain on Saturday, so while the plan is still for the show to go forward, if any community members have questions they can send an email to picayunebandboosters@gmail.com or head to the PMHS Band Booster Facebook page.