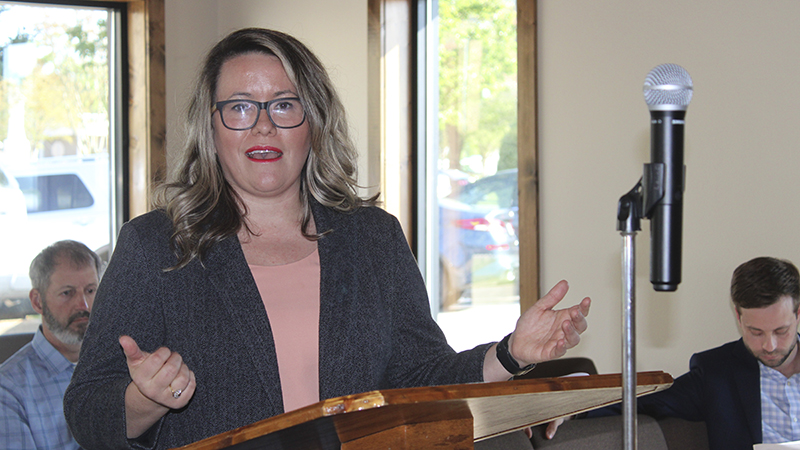 Lindsey Ward tells the Pearl River County Board of Supervisors that she is excited about what the future holds. Ward will be the county's new Economic Development Director. Photo by Cathy Cook.

The Board approved hiring Lindsey Ward as the new Economic Development Director. The previous director’s formal resignation was also accepted by the Board during their regular Board meeting Monday.

Ward has worked for the Southern Mississippi Planning and Development District for almost five years. In the course of that time, she’s worked with Pearl River County’s Board of Supervisors on different projects. She will start the job for Pearl River County April 26.

“I’ve been blessed with the time I’ve gotten to spend with SMPDD, but I’m excited about what the future here holds,” Ward told the Board.

In a separate matter, the Board approved proclaiming April as Sexual Assault Awareness Month, one of several consent agenda actions approved together. The proclamation is in support of the national Start by Believing public awareness campaign.

Attorney Herb Wilson with the Northcutt Legal Clinic, part of the Gulf Coast Center for Nonviolence, was there to accept the proclamation.

“So much of sexual assault relies on secrecy and when people aren’t called out for their abuse and predatory behavior, it allows it to flourish,” Wilson told the Item.

—Accepted a grant agreement with the Lower Pearl River Valley Foundation for $41,097 to replace non compliant self contained breathing apparatus for the Crossroads Volunteer Fire Department.

The next Board meeting will be Wednesday, April 21 at 9 a.m.