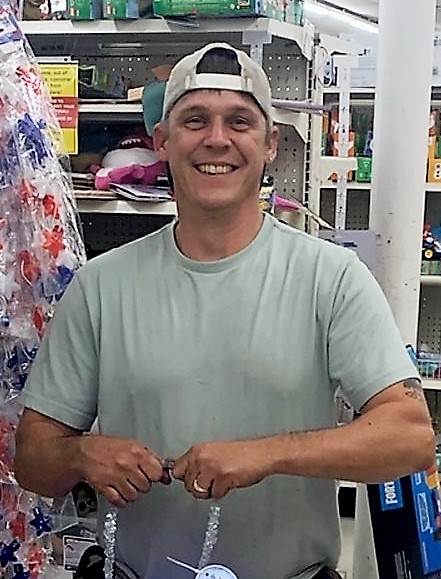 Mark William Harris, 41 of Poplarville, was tragically taken in an accident on I-59 in Pearl River County Wednesday, April 14th. He was preceded by his parents, Allen, Sr. & Marguerite (Bouchereau) Harris. Mark was born October 6, 1979 in New Orleans and grew up in McNeil community where he grew to love fishing. Outgoing and athletic as a young man, he played a little baseball…when the fish weren’t biting that is. Mark was the second of four children, which could have had something to do with his joviality. After high school, Mark did some landscaping, got into construction and figured out that he was pretty good at buying, fixing up and selling cars and trucks. In recent years, that is what he had been focused on, again so long as the fish weren’t biting! Mark did have his struggles in life, just as we all do. In March 2019, he married the love of his life, Tessie Williamson…and boy did he love her. Through ups and downs they stuck it out, and it didn’t hurt that his blue eyes could melt her heart with just a glance. He is remembered as a loving husband and father who was always outgoing and funny. Mark was the one who could find something funny and get a laugh, even in the toughest of times. Family truly was Mark’s life. He did whatever Tessie and the kids wanted and made sure most all of it was well documented, insisting that lots of pictures be taken. An extraordinary guy and trusted friend who leaves us far too soon, Mark will be fondly remembered by all whose life he touched. Left to cherish his memories are: his loving wife Tessie; their six children: Layla Harris of Picayune, LaShae Harris of Poplarville, Jacob and Ski Morrell, both of Carriere and Baylei and Ryleigh Morrell, both of Poplarville; sisters Crystal (Jacob) McMurrian of North MS and Deborah (Michael) Lee of McNeil, with his brother Allen Harris, Jr. of Carriere; his closest friend, Carlos (Jessie) Recarte of Slidell and his bonus father, Wilfred “Poppa” Severin, Jr. of Picayune. Mark’s final wishes were to be cremated, which his family is honoring. A memorial service was held Tuesday, April 20th at Bethel Baptist Church, with Bro. Billy Kent Smith officiating. Trinity Funeral Services is honored to serve the Harris family in this sad time, asking everyone keep Tessie and the entire family in your thoughts and prayers going forward.