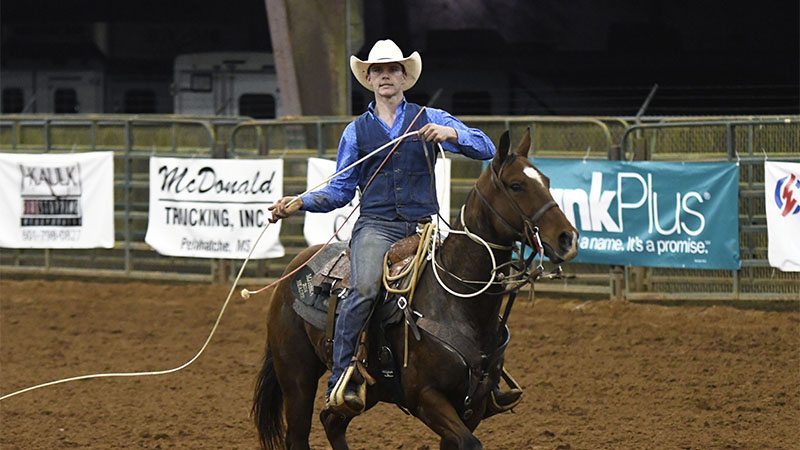 The Pearl River Community College hosted a rodeo this past weekend that saw universities from all over the country come to Poplarville and compete.

Coach Frank Graves said his team’s youth showed at certain points during the rodeo, but in general the performances were positive.

“I think they did good. We’re a young team is the only thing with us and overall they ended up fifth. We were pretty close to winning third, but overall we did good and had a good rodeo,” Graves said.

Graves said there were hundreds of people who came from out of town to compete and watch the rodeo, while plenty of locals came out in droves to support the program as well.

“For us, as far as a school and rodeo program, it was great. There was a lot of support from the community, a lot of people came out to the rodeo. This is the reason I like this program because Poplarville is a rodeo town. There are a lot of past champions here in Poplarville, and a lot of young champions, so what better place to have it than here at home?” Graves said.

Not only did Graves’ program earn some good spots, but there were other benefits outside of the sport that came with PRCC hosting the rodeo in Poplarville.

COVID-19 has wreaked havoc on local businesses across the nation, and Graves said the rodeo was a great opportunity to drive the local economy.

“It gives our local business in this county a chance to show their support and it’s better for our people in the county to have it here,” Graves said.

The rodeo program will have a quick turnaround with the team set to compete in Monticello, Arkansas at the end of this week.

However, in between now and then Graves wants his athletes to work on being more clinical when they have the chance to take a top spot.

“I had a couple that had good stock and just missed the opportunity to catch it. They have to get back to the top 10 and then when they get there they have to work on making sure we get it done on that last deal,” Graves said.

Overall, the weekend was a success, but Graves is already working on next year’s iteration.

“We appreciate the support of the local people that came out and it turned into a really good event, but we’re going to make it bigger and better next year. There are things we’re going to do differently that we didn’t know this year. We’re going to learn and I’m excited to put it on again next year,” Graves said.