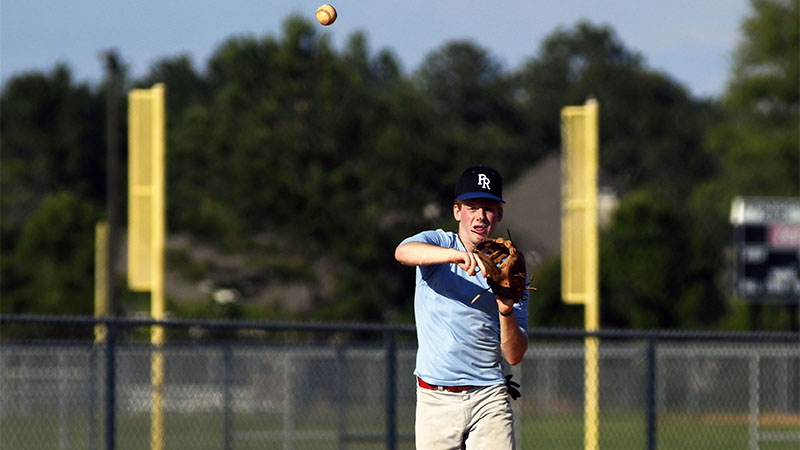 Long Toss: Nolan Walther throws the ball to first during a summer league game. Against Petal, Walther went 1-6 with a walk and a run scored. File photo by Jonathan Mitchell.

Pearl River Central and Petal battled in a 12-inning test of endurance Tuesday night that ended with a 5-4 win for PRC.

The marathon of a game was tied at the end of regulation, so it continued until nearly midnight before PRC was able to drive home two runs after Petal scored a single run in the top of the inning.

Sophomore Caleb Dyess had a huge night at the plate going 3-5 with a double and a run scored, while Caiden Shoemake went 2-5 with a walk.

Head Coach Neil Walther said his team’s resilience during the win ended up being the deciding factor as the Blue Devils were able to overcome some miscues to earn the victory.

“I was really proud of our pitching staff. Jacob Johnson is a freshman for us and he came in and pitched 3 1/3 shutout innings against one of best programs (in the state). We had plenty of opportunities to end the game earlier, but we didn’t get it done. We failed to execute on multiple occasions and Petal failed to execute on multiple occasions, too. Ultimately we were fortunate to pull it out,” Walther said.

All season Walther has been driving home the necessity of his hitters maintaining the right approach when in the box.

There’s no need to smash a homer, PRC just needs to get players on base, and the Blue Devils were able to do that against Petal.

“We had opportunities early in the game, but we didn’t put the ball on the ground and didn’t score, and so you go on to extra innings. If you get enough base runners, enough traffic on the bases, eventually someone makes a mistake,” Walther said.

The Blue Devils have capable hitters throughout the lineup, and that’s shown this year as PRC has marched out to a 9-1 record.

Players know what their jobs are, and work to excel in those specific areas.

This leads to a well-balanced team that, as proven against Petal, can beat anybody in the state.

“I think having high expectations for everybody helps. A lot of them play a role, but they know what their role is and stay in that line. Usually when these guys fail, it’s when they let the game get too big or it speeds up on them. They just have to slow the game down and they’ll have success,” Walther said.

The Blue Devils won’t have much respite coming off such an intense game and will have two more contests to close out the week, including a Saturday matchup against Gulfport.

Walther had to use numerous pitchers in relief against Petal, so the starters in the upcoming games will need to stay in as long as possible with so many relievers needing to recover.

“We’re going to need our starting pitchers to go deeper than usual. Our pitchers have thrown 19 innings in two days. In just varsity innings, if we don’t go into extra innings, they’ll throw 33 innings in a week, so we’ll really need those starters the next (couple of matchups) to go deep in those games,” Walther said.