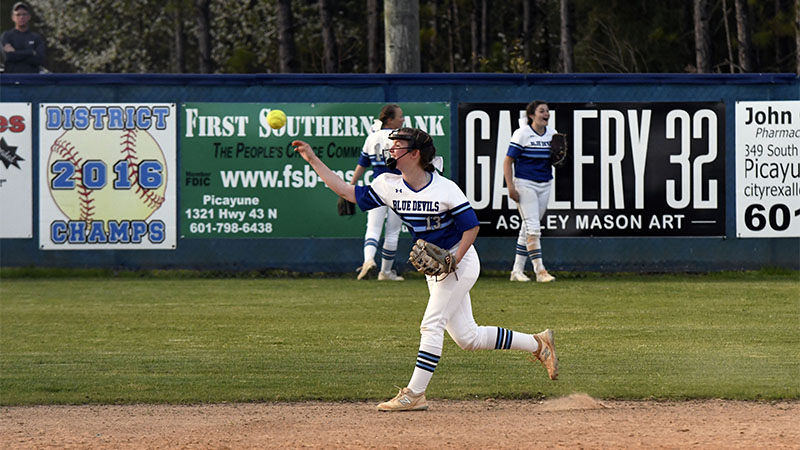 Warming Up: Baylee Devore fires a ball to third during a fielding drill leading up to a game. Photo by Jonathan Mitchell.

The Pearl River Central Lady Blue Devils jumped out to a big lead Monday night against the Hattiesburg Lady Tigers and didn’t look back en route to a 12-0 victory.

The game only lasted four innings because there’s a 12 run mercy rule after that many completed innings.

Jazmin Robertson was dominant on the mound and had eight strikeouts in the four-inning game while only allowing three hits.

Izzy Martin went 2-2 with a homerun and three RBIs while turning in another strong offensive performance.

“She’s consistently been hitting it really hard. Even though she’s a sophomore, she’s almost like a senior since she’s been starting since eighth grade. We don’t have a lot of seniors and juniors so when we say upperclassmen she’s definitely included. She’s the captain of the infield,” Head Coach Tony Labella said.

The Lady Blue Devils are on a nice winning streak having defeated seven straight opponents, but the upcoming competition will provide some stiff resistance.

Labella said his players are going to have to prepare for some top tier pitching when they take on Stone County Friday.

“The three teams we’re playing Friday, Saturday and Monday are all going to have pitchers who throw the ball a lot faster than we’ve seen in the past couple of games,” Labella said.

The win over Hattiesburg not only extended the winning streak, but also gave the Lady Blue Devils athletes their second district win.

In a district with several other talented squads, starting 2-0 gives PRC some wiggle room if the team drops a game.

“We’re glad to get those done because if you don’t start 2-0 you don’t really have a chance of winning district. I don’t think we’re favored to win district but that certainly is our goal. Since I’ve started coaching here this will be the most difficult task because of who (the other teams) have back and how young we are,” Labella said.

The upcoming matchups will serve as a way for the team to try and solidify a starting lineup before an important district game against Long Beach April 1.

Getting a win against the Lady Bearcats would put PRC in a strong position to win the district, but nothing is guaranteed.

“We have a couple spots in the lineup we’re trying to solve. One or two spots where we’re trying to see what exactly we’re going to do, so we’ll be giving people a chance (in the upcoming games),” Labella said.