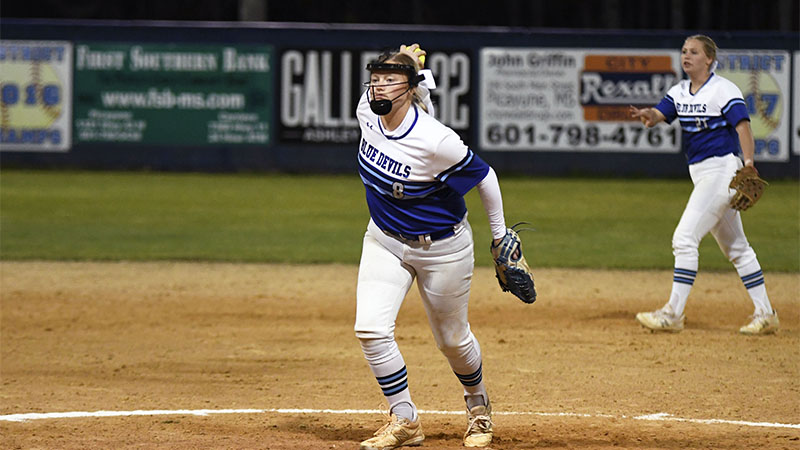 The Lady Blue Devils have not lost a game since March 6 and are now unbeaten in 10 straight games.

The season has come with its complications as several games have had to be rescheduled due to weather, while also dealing with the constant threat of COVID-19.

However, the Lady Blue Devils put in the effort and worked through all of the obstacles to keep the win streak alive.

While the wins against non-district opponents are uplifting, Head Coach Tony Labella said the emphasis this year has been getting his young team into as many competitive environments as possible to prepare the athletes for district play.

“Everything we’ve done as far as scheduling and making up every rainout, stuff like that, has been with the idea of getting ready for Long Beach and Picayune,” Labella said.

Not only have the athletes been learning lessons along the way, but they’ve been winning as well.

“I know we’re improving. Sometimes we have these little flashes where we show our youth, but we’re showing our youth less and less,” Labella said.

Part of the team’s dominant run has been due to Jazmin Robertson’s performances on the mound.

The freshman has developed into one of the team’s top pitchers, as evidenced by her display against West Harrison where she went the full seven innings and struck out two while only giving up three earned runs.

“Even though she’s a freshman she’s one of those people that has been here forever. She pitched in a playoff game as a seventh grader, so there’s not too much that makes her nervous at this point,” Labella said.

Eighth grader Carsyn Cacioppo went 1-4 with an RBI while seventh grader Bayli Cucinello went 1-2 with an RBI against West Harrison in a show of PRC’s depth.

The team is young, but Labella has constantly worked on developing his group’s talent so the athletes can perform at a moment’s notice.

“(With) depth, you’d always like to have more of it, so we’re trying different combinations. We’re trying to have kids get some swings, even if they’re not starting all the time, to try to build 11 (prepared players) so if someone gets hurt, or sick, or falls into a slump it’s not like we give up that spot in the lineup,” Labella said.

However, the pressure will be turned up a notch in the Lady Blue Devils’ next two matchups with both opponents being in the district.

April 1 PRC will travel to Long Beach to take on the Lady Bearcats and April 6 the Lady Blue Devils will have a game at Picayune.

If PRC wins both games the team will be 4-0 in district play with just three district games left to play.

The Lady Blue Devils know what’s at stake, and for a team with the yearly expectation of winning district, the next two games could be the key to that title.

“I think they get it. They understand the little things. Practice has become more focused and businesslike. We’ve had some really close games with (Long Beach), so I know it’ll be intense on Thursday,” Labella said.